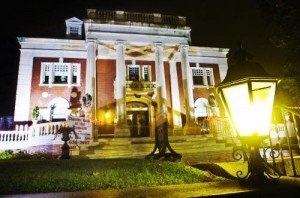 Hanover’s Warehime-Myers Mansion is open to tourists interested in architecture, history and heritage. For the next two weeks, the Baltimore Street mansion will play host to visitors drawn to ghosts, goblins and other Halloween things.  It’s another example of heritage groups mixing history and the haunted, non-fiction and fiction. Don’t know about that. I think it’s confusing, that it’s hard enough to sort fact from fiction without intentionally mixing things up. What do you think? Some additional thoughts: ‘Ruh-row, Raggy’: Gettysburg ghost hunters find no trespassing signs and  and What do you think about those ghost stories linked to historic sites in York and Adams counties?.

Veep Joe Biden was in town Tuesday, sparking much coverage from York Daily Record/Sunday News staff in print and on ydr.com.

Here’s an intriguing  story from the coverage, headlined “Best tidbit” in the YDR.

For two years, Vice President Joe Biden’s father was a resident at the York YMCA.

On weeknights, Joseph Robinette Biden Sr. lived in the complex at West Philadelphia and North Newberry streets while working for the York office of the Maryland-based American Oil Company, now AMACO, a Biden spokeswoman said Tuesday.

On the weekends, he commuted home to his family in Scranton. He died in 2002 at age 86.

The White House connection surprised some YMCA staff, who said the claim would be difficult to verify. The current record-keeping system goes back only 15 years, said Larry Richardson, president and chief executive officer.

Currently a men’s homeless shelter, the 120-room housing block, in use since 1925, once served as a hotel, or “glorified boarding house” for transient workers and others, he said.

“This very well could be,” he added. “We’re never surprised when somebody says, ‘I used to stay at the York YMCA.'”

Wonder what other noteworthy people have stayed in the Y? Comment below if you know of any. Here’s one: Billy Graham.

Web site of note: If you ever wanted more about the locale signaled by historical markers – Fort Couch, in this case – visit: Explore Pa. History.

Story brings back memories:  Ahead of his time:  Klinedinst’s offered one-stop shopping in the 1940s.

Remember this sign? – That truck-shaped sign along Interstate 83 near Emigsville? It’s coming down and will become, well, a museum piece.

Forum of the day: Exchangers are discussing: York’s famous music groups and bands.