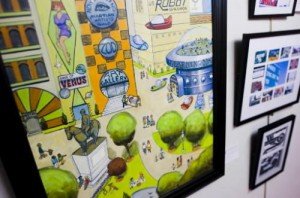 This view of Hanover’s square of the future, illustrated by local artist Kirby Heltebridle, keeps its bronze equestrian statue, ‘The Picket,’ in prominence. This illustration (click to enlarge) combines the two anniversaries coming together in this southwestern York County, Pa., borough in the next few days: Hanover’s 250th anniversary and the 150th anniversary of the Battle of Hanover – and Gettysburg. This piece is on display for the Historical Celebration show at the Hanover Area Arts Guild. Sixty-five pieces created by local artists and photographers are on display and will be at a reception June 29 to discuss their pieces, according to the Hanover Evening Sun story: Artists depict Hanover in honor of 250th anniversary . Also of interest: See Hanover’s cavalry statue in Gettysburg 100.

More Gettysburg 150 stuff from all over …

“Is it possible to not hear about York’s role in the Civil War anymore?”

Only the people of York, he argued, think that the then-borough had any actual significance in the war.

The Battle of Gettysburg would have been the same, whether York existed or not.

“Ask anyone outside of York what happened in York before G-burg and 99/100 will say ‘York PA?, Never heard of it.'”

“Understand what you’re saying. I don’t think York played a pivotal role in the war but it played a role in the war. For too long, we couldn’t get past the surrender. Now we’re learning about the massive CW hospital here, the cavalry clash that did delay Jeb Stuart from finding Lee, aggressive early response to Lincoln’s call for troops, the training of thousands and thousands of Union troops here. One out of 6 Confederate soldiers at Gettysburg marched on York County soil. And we are now seeing numbers like 600 York countians died in the war, probably more. That’s more than in any other war… . But we were in there pretty well.”

Cupola Cam: It’s live. The YDR and two sister newsrooms have installed a camera in the cupola of Schmucker Hall at Gettysburg Lutheran Seminary. Check out: Cupola Cam. 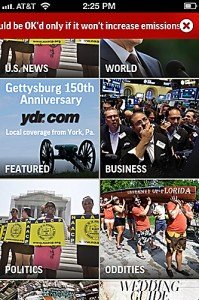 Here is a screenshot of the homepage of AP’s new app for iPad and iPhones, which features Gettysburg 150 coverage from newsrooms of the York Daily Record, Hanover Evening Sun and Chambersburg Public Opinion.