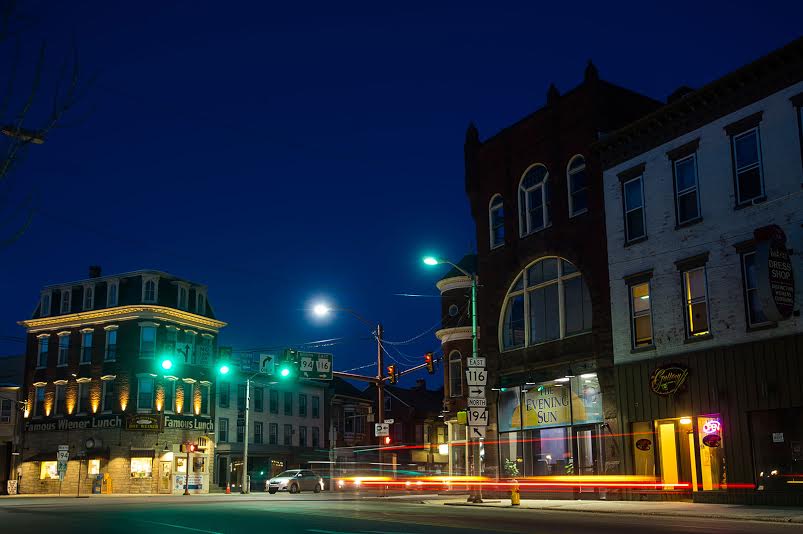 This engaging photograph shows downtown Hanover at night. Specifically, Evening Sun photographer Shane Dunlap was aiming for – and captured – the news organization’s new digs in a winsome way. It’s the building with the fan-shaped, second-story window known to many as the former Tanger Hardware building.The Evening Sun is working on its second century in a first-floor newsroom. Also of interest: In Hanover, Evening Sun’s newsroom moving into former Tanger Hardware space.

The Evening Sun has not only relocated to a newly revamped newsroom, but also has kicked off its 100th anniversary.

And not only the Evening Sun’s history. It has ranked 10 memorable news stories since 1915 and 10 top sports moments in the past century. And much more. 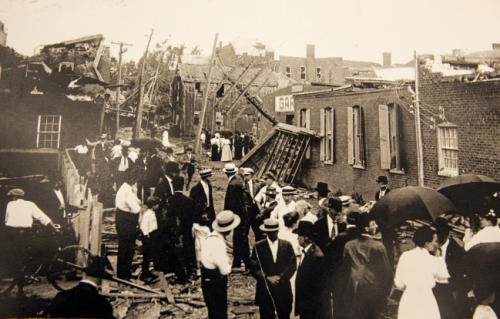 Yorkblogger June Lloyd wrote about the 1915 tornado, and her headline gives a concise summary: ‘Hanover badly damaged in 1915 tornado, but no lives lost.’

The Evening Sun’s summary of the 1915 tornado, found in its 100th anniversary online package:

“A tornado touched down in Hanover on Aug. 21, causing more than $500,000 in damage, today’s equivalent to $9 million. The cyclone reportedly entered downtown Hanover on Westminster Avenue just south of Frederick street, causing the most devastation to the Hanover Glove Co., which needed rebuilding after the storm. The Evening Sun not only documented the wreckage, but played an active role in delivering the news to the outside world. “The first news of the Cyclone was given to the outside world by the staff of The Evening Sun who drove to York at 10 Saturday night to get into telephone communication with Philadelphia and Baltimore. The story that was sent over the long distance wires was at first doubted by the editors at the other end of the wires.

“It was unbelievable, they said, that no death had paid tribute to the terrible storm,” The Evening Sun reported August 23. The Evening Sun’s coverage of the Saturday evening storm did not run until two days later because, at the time, there was no print issue on Sundays. Philadelphia and New York papers later came to Hanover to report on the damage. Just two weeks later, the town had cleared the majority of the wreckage in time for the centennial celebration of the incorporation of Hanover Borough.” 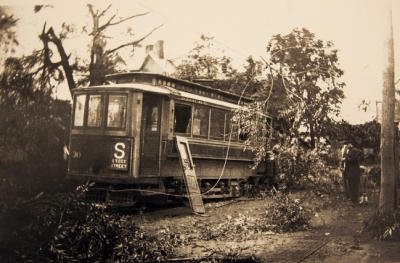 A trolley car, part of the extensive York County trolley system, sustained damage in the tornado. This photo and the one above come from the Pennsylvania Room, a rich repository of regional history. 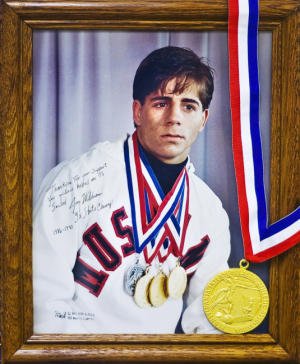 “The win against Rudy also came despite a cracked bone in Wildasin’s foot and a rotator cuff injury, according to newspaper records.

“Wildasin also won four district titles in his career, racking up 132 wins. His only high school loss came in the state finals his freshman year.”