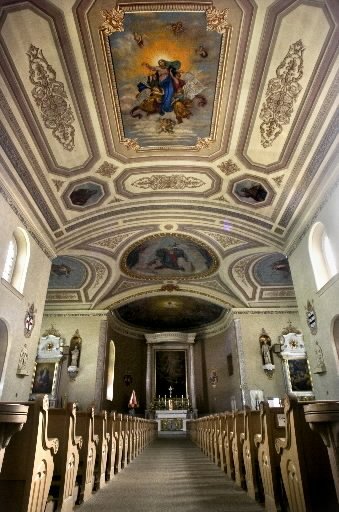 A painting of the Assumption of the Blessed Mother dominates the roof of Basilica of the Sacred Heart of Jesus in Conewago Township, Adams County.  Stained-glass windows in the sanctuary of the 18th-century basilica, known as Conewago Chapel, depict the life of Jesus. Notice the umbrella at the left of the chancel. There’s a story to that too. Also of interest: Conewago Chapel steeple worker wondered if he’d ever get up there: Now, ‘Here I am’.

News of Pope Benedict XVI’s retirement put forth this morning means that Conewago Chapel will keep awaiting a visit from the pontiff a bit longer. (Update: 9/25/15: And will be even longer; Conewago Chapel wasn’t on Pope Francis’ schedule in his September 2015 visit to Philadelphia.)

But the basilica is ready as this question-and-answer from this post Mining a rich vein of southwestern York Co.’s religious history indicates:

Q. Why is there an umbrella in the chancel of Conewago Chapel?
A. A red-and-yellow umbrella stands in the altar area of the Edgegrove’s Sacred Heart Basilica, an indication that the building has basilica status. Two symbols — an umbrella and a bell — go with basilicas, churches deemed notable by the pope.
“When the Pope used to travel from his residence to the basilica, a cleric went first ringing an announcement bell,” a church brochure states, “while another waited to escort him (with umbrella) from the carriage to the basilica door.” The umbrella is there in Adams County today, waiting to be used for its first papal visit. 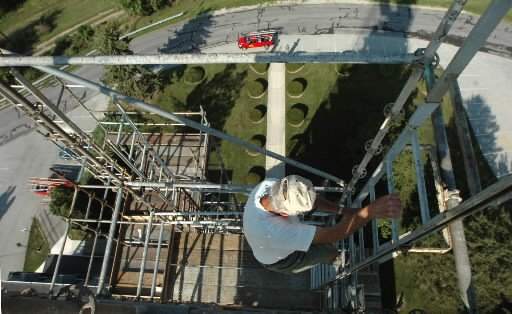 Jim Strasbaugh works on the 142-foot-high church steeple at the basilica when it was undergoing renovations several years ago.

Posts about Roman Catholics in York/Adams and Baltimore:

The church of St. Patrick: A church without a steeple, by design 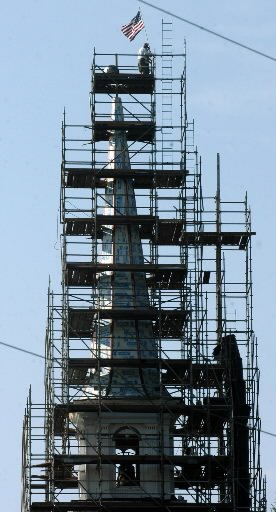 Brent Carbaugh works on a flag atop the scaffolding around the basilica’s chapel.  According to the York Daily Record/Sunday News, the tower, resting on a rocking-chair-like substructure, is designed to give slightly in high winds. ‘You can feel the steeple move when you’re up there and it’s blowing,’ said one worker.