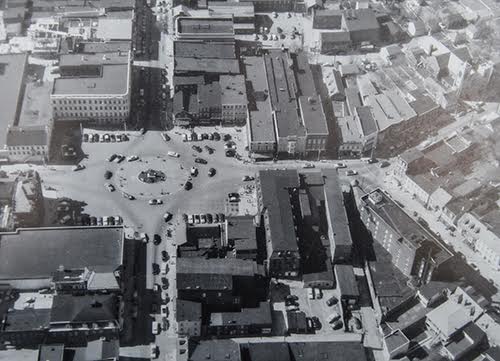 This bird’s-eye view shows Hanover’s Center Square in the 1950s. The equestrian statue – the Picket – stood in the middle of the square in those days. It has since been moved to one of the corners. The borough’s 200th anniversary of its incorporation comes this year. Hanover officials hosted a major celebration of the 250th birthday of the Hanover in 2013. Here’s a brief story of the town’s founding in 1763, from my ‘Never to be Forgotten’: ‘Innkeeper Richard McAllister lays out future Hanover in lowlands at the junction of busy trade roads. The area previously was part of Digges Choice. According to one account, McAllister names the town Hanover to gain favor from the many people of German descent who populate that area. Much later, Hanover adopted a municipal flag bearing the colors of blue, the color of the state flag; white, for York, the White Rose City; and gold, prominent in the heraldry of the House of Hannover, Germany. Many people, including a visiting George Washington, called the town McAllistertown. As a crossroads community, Hanover played host to many prominent citizens including Benjamin Franklin, Martha Washington and Gen. “Mad Anthony” Wayne.’ For other photos of old Hanover, courtesy the Hanover Area Historical Society, check out this Evening Sun Media Center gallery. Also of interest: This iconic Evening Sun photograph shows Hanover’s square at ground level.

Monica Rhodes queried YorkTownSquare recently about where to get a printed copy of a map of Street Art/sculptures in downtown York.

I’m not aware of any in printed form. You indicated you saw the map/quiz in the story above: Add to your York, Pa., smarts. You might query Downtown York Inc.

Some of the street art and memorials were undertaken by artist Lorann Jacobs. Here’s an inventory of some of her work.

Museum to watch: PennLive.com tells about a museum in Somerset County that beckons visitors: a place to learn about the Quecreek mine rescue. Remember that? And the tube or device used to transport the miners to the surface is on display. That in itself would make the trip worthwhile.

History Mystery: This museum is slated to move, but it’s open in the meantime (Click on the date if the image does not appear on our mobile device) … .

History Mystery: This is an very interesting, but often overlooked museum in #YorkCountyPa. Can you ID this place – and…