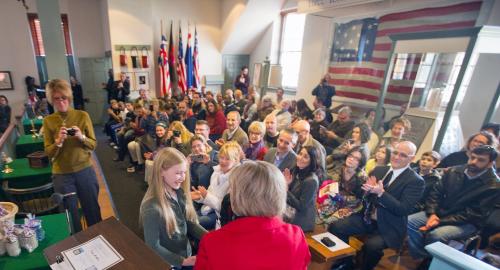 York, Pa.’s, Colonial Court House, a 1976 replica of the building where the Continental Congress met in 1777-78, was filled with young voices on Sunday. Many had roles in developing multi-media projects entered in the York County Heritage Trust and York Daily Record/Sunday News Articles of Confederation Day Media Contest. Here, Rose Beyer, a Dallastown Area School District elementary school student, receives a first-place award for her project. Also of interest: American Revolution contest prompts York County elementary class to do its homework and Continental Congress struggled into York, and delegates strutted back to Philly 9 months later.

Students developed multi-media presentations to tell about the making of the Articles of Confederation, life in the York in 1777-78 and other themes associated with the Colonial period.

In past years, students submitted essays on the Articles, an idea whose time was passing. Interest in essay writing was waning.

But the multi-media presentations represented a rebirth of story telling about this key moment in York’s – and America’s – history. The Articles of Confederation document served as America’s first framework of government.

The presentations combined audio clips, still photography video, Powerpoint and other digital tools in a way that energized the telling of this story, arguably the highlight of York County’s long history.

In so doing, important information came out:

– The U.S. Constitution addressed problems that the Articles of Confederation posed.

– You can’t teach the Constitution without teaching the Articles.

The long and short is that the readily available digital tools allow teachers and students to build a framework of their own – an educational framework that fosters learning.

The digital projects telling about a document – whose ideas were originally written in long hand and later printed by hand – effectively demonstrated that these students learned about this important American moment.

– The digital projects are posted digitally on the York County Heritage Trust’s website.

– And another project from Central York: Look out Wikipedia, here come the Murals of York, courtesy of Roundtown Elementary third graders

Elizabeth L. Stein explains the significance of the Articles of Confederation.