‘The thrifty and prosperous town’ of Hallam: The boroughs of York County, Pa., series, No. 5

Fifth in a series of occasional posts about York County’s 36 boroughs … .
There’s a lot to say about Hallam borough.
Hallam is often confused with its older brother, Hellam Township. To understand why the spellings vary, visit: Why are Hallam Borough and Hellam Township spelled differently?
It’s a neat little borough lining the old Lincoln Highway, now 462… .

It’s the nearest town to the Haines Shoe House, a former Lincoln Highway roadside attraction, and an orchard in the vicinity first produced the York Imperial Apple.
And it just lost its post office, as part of U.S. Postal Service belt-tightening measures.
Its location as a large village between Wrightsville and York – and the largest in Hellam Township – helped put it on the map. In time, the railroad and trolley joined the highway in linking Hallam to the outside world.
Hallam, actually, has been been around for decades as a village named Hellam, but only has been incorporated as a borough since 1908.
As an old place, it’s home of the one of York County’s oldest residences, the Martin Schultz house.
Speaking of residences, Hallam is a little different from many other of York County’s boroughs.
It’s growing.
The York Daily Record/Sunday News reported in 2007 that the borough has more than doubled in size this decade. The Buttonwood subdivision, made up of 550 garden apartments and townhouses, sparked the growth.
What others say about Hallam: Historian George Prowell wrote in 1907, a year before Hallam incorporated:
“The central point of interest in this township is the thrifty and prosperous town of Hellam. It is situated in the heart of Kreutz Creek Valley, along the trolley line and the turnpike, which extends from York to Wrightsville.”
Population in 2000 – 1,532. (York County census numbers.) Its projected population was 2,790 on 2006.
Incorporated: May 25, 1908. (York County founding dates.) It’s the fourth newest borough, after Jacobus, Yorkana and Mount Wolf
To learn more: Kreutz Creek Valley Preservation Society. 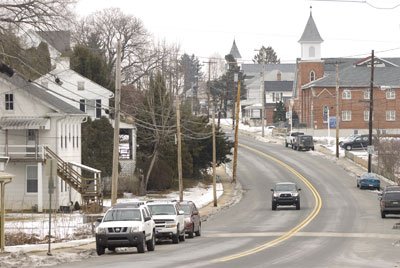