Two York County, Pa., icons come together, as children enjoy Loganville-based Carmen’s Ice Cream outside Hellam Township’s Haines Shoe House, in this 2008 York Daily Record/Sunday News photograph. The Shoe House will figure in New Year’s festivities this year when a large shoe will drop at midnight in nearby Hallam borough. (See the shoe being made below.) Also of interest: Route 30 Roadside Giant sprouts as tourism lure and Landmark Modernaire Motel built in Lincoln Highway’s heyday and Lincoln Highway Communities: ‘I know I’ll be back’.
Let’s see.
York has its rose. Dillsburg has a pickle. Red Lion a cigar. Mechanicsburg a wrench. Harrisburg a strawberry. Hershey a kiss, a Hershey Kiss, that is.
Now Hallam borough – not to be confused with Hellam, the township – is going to let a shoe drop. That’s an 8-foot, 125-pound shoe.
Perhaps the oversized shoe is appropriate, for it is borrowed from a nearby oversized shoe-shaped house, the well-known Haines Shoe House… . 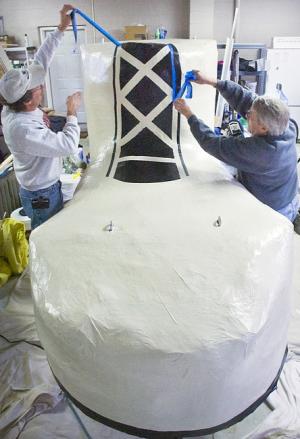 Bill Conaway, left, and Steve Dellinger pull the masking off The Shoe House replica at Dellinger’s home in Hellam Township.
The Shoe House, built in 1948, is an example of a roadside giant or supersized tourist attraction often found along or near the old Lincoln Highway. They were built big to catch the attention of motorists, and in the case of the shoe house, to promote its builder’s business, as well.
So Lancaster has its Windmill. Bedford has its coffee pot, relocated to its fairgrounds. The old Ship Hotel rested on the mountainside between Bedford and Somerset.
And York had Mahlon Haines Shoe House, built by the self-proclaimed Shoe Wizard.
“He began on a shoe string,” the Saturday Evening Post said of Haines, “which he tied into a long string of shoe stores.”
Here’s what Brian Butko wrote about the Shoe House in his “The Lincoln Highway, Pennsylvania Traveler’s Guide:”

Mahlon ‘The Shoe Wizard’ Haines built a shoe sales empire in central Pennsylvania and northern Maryland that included more than 40 stores. Haines had a flair for outlandish advertising, calling himself ‘Colonel’ Haines and offering money to smokers if they promised to quit and to those in a crowd who could identify him. The Shoe House was his ultimate gimmick. Built in 1948 (when Haines was seventy-three years old) of stucco over a wood and wire framework, there are seven rooms but really only enough space for a small family. The shoe motif is everywhere, including a stained glass window with an image of Haines in it. Haines offered the house free to elderly couples, who could live for a weekend like “kings and queens” at Haines’s expense. After 1950, it was also offered to honeymooners who had a Haines Shoe Store in their town.