So often, the name of achievers appear on the side of York County buildings.

Often, as the years pass, the person behind the name is forgotten.

So we should pause a second to remember Ralph Swenson’s name, as in the new Ralph G. and Madeline B. Swenson Engineering Center at Penn State York… .

Swenson came to York in 1969 when AMF purchased Harley, and became general manager of the Springettsbury plant. He was one of 13 – a lucky number in this case – to purchase Harley from AMF in 1981.

He became involved in the York community, eventually reaching emeritus status on the board.

He has a neat legacy.

For more details on the Swenson center, visit: Engineering Center.

– All Harley Davidson posts from the start. 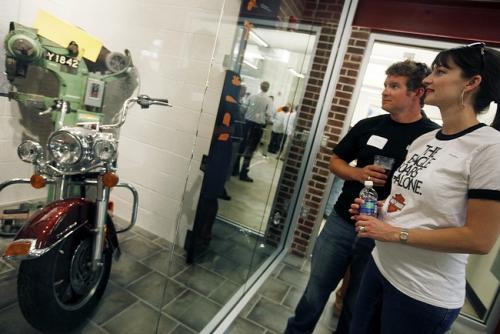 Harley enthusiasts have an opportunity to view equipment and motorcycle parts at the Ralph G. and Madeline B. Swenson Engineering Center at Penn State York. For details about the exhibit, click here. Interestingly, in the past few years, York College has dedicated a new engineering center after Robert Kinsley, principal of Kinsley Construction. The Kinsley Engineering Center is on the site of the former York Narrow Fabrics.