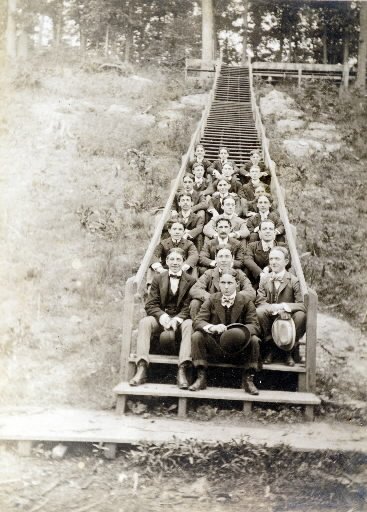 These 160 steps from the lower level of Highland Park to the upper part were called “Fat Man’s Misery.” The park operated in the vicinity of Dogtown, on the north side of the Codorus Creek, south of Old Salem Road, between Highland Avenue and Hoke Street. Highland is described in “The Gazetter” as a “former recreational park in south eastern West Manchester Township . . . .” A large theater, dance hall, skating rink, merry-go-round, circular swing, penny arcade and numerous refreshment stands operated at the park. Highland Park, along with fellow recreational sites Cold Springs, near Manchester, and Brookside, near Dover, provided riders for trolleys during off-peak times — evenings and weekends. (See postcard of the steps here and another photo, sans young people, below: Background post: Speeding trolleys drew criticism.

They were called electric parks because of their illumination by generous numbers of electric lights.
What they did was provide service for trolley companies during times when ridership was low. Many trolley users were going to and from work, often in York’s many factories. What to do to promote use of weekends and evenings?
Thus began Brookside, Highland and Cold Springs parks in York County… .

In his paper, “Time of the trolley”, Dan Meckley says this about the three parks:
– Cold Springs, on the Conewago Creek, north of Manchester. “A beautiful grove whose never failing springs, cool shade, and pavilions are free to the company’s patrons.” Conewago Beach, a swimming hole in the Conewago, was a popular feature. All that remains of the park today are trolley bridge columns spanning the Conewago.
– Brookside Park: After trolleys ceased in 1939, York Barbell’s Bob Hoffman purchased this park in 1941, “To keep things as they are.” Dover Township now owns the park, complete with several buildings from the park’s heyday. The carousel building is one of those existing structures, and the merry-go-round was one of those types that offers the opportunity to grab a brass ring. A local company, Campbell Chain Co., made the rings.
– West Manchester Township’s Highland Park was so large that it accommodated 5,000 Pennsylvania Lutherans in 1891, and that was before it was a fully developed trolley park. It was located on the north side of the Codorus Creek between Highland Avenue and Hoke Street before it was dismantled in the 1920s.
Springwood Park, operating on the Ma & Pa Railroad near Yoe from the early 1900s to 1954, was not technically a trolley park because it wasn’t built to boost ridership of trolleys or trains.
Its main feature was a swimming pool with sloping side, 125 feet by 75 feet and six feet deep.
(Photo courtesy of “West Manchester Township, 200th Celebration”) 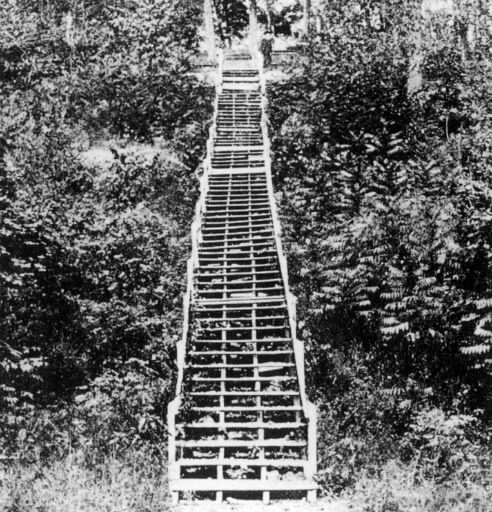