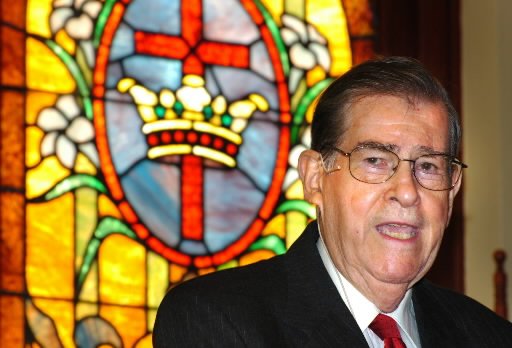 Dr. Charles H. Glatfelter was rewarded with a standing ovation in June 2010 after his presentation on Glen Rock’s religious histories at Zion Lutheran Church in that southern York County borough. His speech was part of Glen Rock’s 150th anniversary festivities. Also of interest: ‘These 1912 drivers!’ and other stories around Glen Rock, Pa. and A leading York County name: ‘Keeping it in family is the Glatfelter way’.

He’s looking for help with family research that crosses onto York County soil.

He mentioned in a recent email that he ran across yorktownsquare.com in researching the writings of Pennsylvania German historian Charles H. Glatfelter. He asked that I forward his query on the Greathouse family to local researchers who could shed some light on his questions.

I’ve done that here and will take it step further. It’s always great to check in with Dr. Glatfelter, himself the Glatfelter family archivist for years.

“After finding that Charles Henry Glatfelter wrote extensively about the founding of St. Michael’s Lutheran Church of Germantown, PA, which related our Grothaus immigrant ancestors, Herman & John Grothaus, who settled at Springfield, PA about 1710, as wardens of the church, who collected funds and oversaw the building of the church… so I sought to learn more about Charles Henry Glatfelter, which led me to your articles which mention him.

“We have a bit of a mystery for one of the grandsons of Herman Grothaus. Herman Grothaus had two sons: Henry Grothaus and John Grothaus.Henry Grothaus moved to Heidelberg, Chester County, PA where he was assessed for taxes in Jan 1726/7. He raised his family either in Chester or Lancaster counties through his death which occurred in 1745. In his will, named his wife and 10 children, with the first son named as Hermand Grothaus. John Grothaus married Anna Amelia Miller at Christ Church, Philadelphia on 10 Nov 1720. This couple raised their family on the 500 acre farm of his father Herman Grothaus between 1720 and 1742 at 527 Mermaid Lane then between 1742 through Anna Amelia’s death in 1774 and John’s death in 1791, at 901 Abington Avenue.

“For some reason, this couple left no documentation which directly related who their children were, so it is an assumption that any Greathouses who come of age and created records, whether by marriage or by witnessing baptisms in Philadelphia County, PA were probably their children. If they also had a son whom they named Herman, then we could have a really hard time distinguishing Herman, son of Henry Greathouse from Herman, son of John Greathouse. In that case, it would take very meticulous work to sort out which Herman Greathouse was the son of either Henry or John Greathouse. The other problem that compounds this problem is that Henry Greathouse became sick suddenly while he was in Philadelphia working with his brother to settle their father, Herman Grothaus’s estate.

“He did manage to write a will before his death, in which he named his wife and 10 children.Through very meticulous work, finally we have documentation which could support that there was two men by the name of Herman Greathouse who was born between 1717 and 1724.1) Herman Greathouse, his wife Mary Stull and their daughter Rachel Greathouse were named in the will of John Stull of Hagerstown, Frederick County, MD in 1749. They obtained by deed a tract of land called Chestnut Spring located on Antietam Creek near Sharpsburg, MD in 1750. They sold that tract in 1755 and appear to have moved to Shepherdstown, Frederick County, VA, where Herman Greathouse was documented as working as a chain carrier for Thomas Rutherford in multiple surveys turned in by Rutherford. They may have moved to Paw Paw, Hampshire County, VA before 1766, when they obtained by deed 500 acres on the ‘long bottom of the Potomac’ adjoining Thomas Rutherford, William Bickerstaff, John, Nicholas and Andrew Friend and Col. Angus McDonald. They sold this land to Michael Cresap in Aug 1772. By spring of 1773, they were settling 800 acres along the Ohio River on Harmans Creek, near present-day Weirton, WV.

“2) Herman Greathouse and his wife Mary ?, obtained ‘Harmans Valley’, 10 acres opposite Marriottsville, MD, along Piney Creek, from Robert Marshall in 1759. Where this couple came from before settling near Marriottsville, MD is unknown. This couple was named in records of Baltimore County, MD from 1759 through 1795. While sorting through events that occurred in the area about the time this Herman Greathouse arrived there in 1759… events like when were roads built… etc… I stumbled upon Charles Henry Glatfelter’s article about Hanover Junction 2001, where in he related,

” ‘Although rather self sufficient, these people wanted things they could not make for themselves. They needed a place to sell their surplus, whatever it might be. As a market for these first settlers, York was too small and Philadelphia, too distant. The town and excellent port of Baltimore proved to be the market they desired. By 1760 there were two public roads in existence leading from York to Baltimore.’

“I think it may be plausible that the Herman Greathouse, born 1717, of Baltimore County, MD, in 1759, may have come to Baltimore from either York or Lancaster, PA. So I would like to find documentation which places a Herman Greathouse in either York or Lancaster, PA between 1745 and 1759.Would appreciate any help you could offer to obtain that information. If you could refer this query to someone who may be able to help, that would be great.”

Now, yorktownsquare.com readers know the Greathouse inquiry and I will mail it to Dr. Glatfelter in Adams County. Contact Rick, rick@greathouse.us, if you can help.

“Greathouse Point, home of the Greathouse Historical Center and Guild Greathouse are devoted to the study of Greathouse family genealogy, history and surname, including, but not limited to, those descending from Herman Groethausen, who immigrated to Philadelphia, Pennsylvania about 1710 from Bielefeld, Ravensberg, Brandenburg, Prussia. Herman is the first American Greathouse whom we can trace. More research is needed to accurately document his descendants and their associated families.”