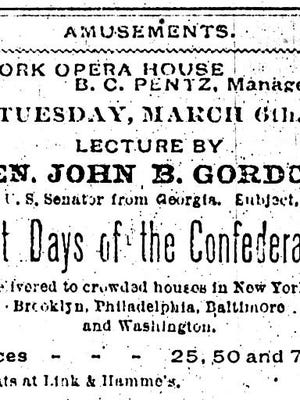 York should have lost rebel Gen. John B. Gordon and his ‘Last Days of Confederacy’ talk

Imagine if a Pancho Villa-type invader from Mexico had penetrated into the United States as far as the west bank of the Susquehanna River maybe 30 years ago.
The head of this hypothetical invading force was gentlemanly, but this did not keep his men from stealing the cars and other property from many York countians. Further, he damaged other property – catalyzing the destruction of an expensive Susquehanna River bridge and trampling valuable crops in fields. He killed at least one defender  of the county – a black man in the trenches in Wrightsville – and shaped the way York viewed itself for years.
Would we welcome him back as a hero? … .

That’s exactly what York did with John B. Gordon, who was on the lecture circuit in his later years, in 1894.

In late-June 1863, then-Gen. John B. Gordon had been in the vanguard of the Confederate Army’s invasion of York County.
Some might argue that the older John B. Gordon was a fellow American, and the nation was still trying to regroup as a nation.
But it shows again that York countians did not have fire in their bellies against those grayclad horse thieves (back to the car analogy) who terrorized most of their county in those days before the Battle of Gettysburg. And they could not muster resolve against an enemy that was protecting the enslavement of an entire race of people.
They should have disinvited Gordon and his Lost Cause ideas.
June Burk Lloyd blogs with much more on his appearance in York. (Her Universal York post really got me thinking about this.)