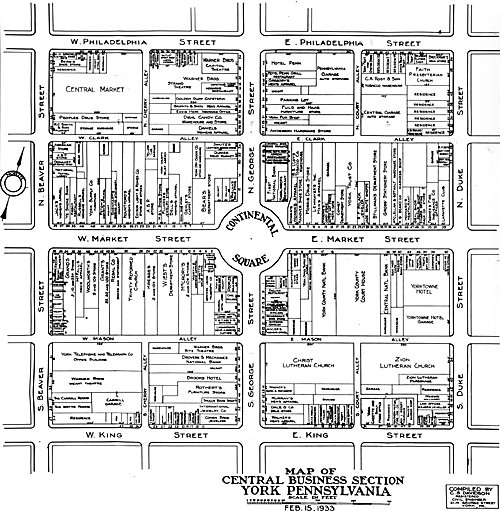 Newswanger’s, a landmark shoe store on York’s Continental Square, was typical of the small retail shops that prospered in the downtown in the middle part of the 20th century. These shops have largely disappeared, as columnist Gordon Freireich writes below. Freireich supplied this drawing from 1933. Background posts: Buildings reveal a bit about York and Landmark Futer Bros. building in new hands.

“Greater York in Action,” a 1968 publication, provides insight into the order of downtown York’s decline as a retail hub.

The book, published at the time of York’s race riots in 1968 but before the deadly riots of 1969, suggests that major retailers were expanding into the growing suburbs even before the unrest… .

“Greater York,” a York Area Chamber of Commerce publication, paints the decision by The Bon-Ton and Wiest’s to open retail stores in suburban malls as an opportunity. It does not delve into the probability that their downtown franchises were slipping, and they were facing major competition from the York Mall, opening for the 1968-69 shopping season.
Here’s the order:
– Sears opened as part of the York County Shopping Center in 1955.
– York County Shopping Center opened in 1956, the York-area’s first such center.
– Bon-Ton opens a store at the North Mall, the center where Off Track Wagering is located today, in August of 1968.
– The York Mall opens in late 1968.
– In 1968, Wiest’s planned to open its first branch store in the North Mall Shopping Center.
– Specialty shops also prepared to expand to suburban shopping centers – Gregory’s planned to open its first such store in 1968 at the York Mall. Newswanger’s planned a suburban store in Lincoln Highway East.
It’s not in the book, but the opening of the Wright’s Ferry Bridge in 1972 gave York County residents easier access to shopping centers in Lancaster County.
Summary point: Sometimes, the riots are blamed for the demise of the downtown. But “Greater York in Action” unwittingly suggests that local retailers were scrambling for new customers even before the negative force of the unrest took hold. Few would question that the riots expedited retail movement to the suburbs though.
After all this sad news of a churning market place, columnist Gordon Freireich brings us back to York’s glory days in the 1950s in his York Sunday News column (2/17/08):

A number of thoughts came together in my brain over the past few weeks.
One was the passing of Mary Stotsky, a longtime downtown York merchant.
Mary’s death was followed by that of Vivian List. She and her husband Arthur operated the Lullaby Shop in downtown York at one time.
Another was the sudden closing of Rapid Shoe Repair on the corner of Princess and George streets, across the street from the downtown Post Office building.
The fourth was the fact that L. Morgan , an independent jewelry store in the first block of South George Street, will soon be closing.
What the thoughts all have as a common denominator is the concept of specialty stores.
Mary and Meyer Stotsky operated the Terminal Luggage Shop (in the first block of South George Street and later moved the store to the first block of West Market Street) from 1954 until 1987. In a time when people traveled with more than a carry-on bag or a backpack, suitcases were big business. Few brides and grooms would have departed on their honeymoons without matched luggage, ranging from hatboxes to three-suiters. And Terminal Luggage had it all.
I loved the smell of the store. Like the old Smutz Leather Goods Shop at 24 N. George St., you could breathe in the heady aroma of leather. There was always a sense of excitement and anticipation of a trip to come when you walked into Terminal Luggage. I vividly recall going there with my father before I headed off to college to purchase a trunk we would use to ship my clothing to my campus. That trunk and the one my roommate had sent ahead were stacked on top of one another to create a table between the beds in the small dormitory room.
The leather odor of Rapid Shoe Repair and the many other cobbler businesses in York was always a welcomed “senses-awakener,” too. I was sorry to see Rapid Shoe Repair close its doors because it was convenient to drop off a comfortable — but worn — pair of shoes and have them given new life.
L. Morgan Jewelers was a relative “newcomer” to the York downtown landscape. It bucked a trend by opening a store when others were closing. Now — following on the heels of the closing of Weinbrom’s — it, too, is going the way of so many other jewelry stores in the mid-town area. Only a few remain to uphold the tradition of York’s once-elegant shopping past.
It would be difficult for those under 50 to remember downtown stores that specialized not only in luggage, baby items, jewelry and shoe repairs, but candy, women’s hats, men’s hats, corsets and toys. Yet that was downtown York in the 1950s. And the key to their success was personalized service.
Here’s a brief “walk” past some of those shops around 1957:
Women’s hat shops included Buddy Dale, 22 S. George; Chic Millinery, 33 W. Market; Fashion Hats, 28 N. Beaver; Laura Neff, 20 S. Queen; Reed’s Millinery, 58 W. Market; Ritter’s on Continental Square; and Wilmar Hat, 54 W. Market.
Shoe stores were all over the downtown area. Newswanger’s on the Square; A S Beck, 53-55 W. Market; Cut-Rate, 123 W. Market; Fair & Square, 145 W. Market; Haines, 117 S. George and 231 N. George; Hammonds, 7-9 S. Beaver; Hanover, 7 S. George; Hermann’s, 11 E. Market; Houcks, 10 E. King, Kinney, 25-27 W. Market; M&L, 19 W. Market; Paragon, 21 W. Market; Reineberg’s, 51-53 S. George; Smith Brothers Boot Shop, 19 S. George; Stanwyck’s, 15 S. George; and Walk-Rite, 154 S. George.
Then called “Corsetieres,” there were three shops for women to visit for specialty undergarments — Charis of York, 137 S. George; Mountford’s, 15 S. Beaver; and Mary Rutter, 162 E. Market.
Luggage could be purchased at Terminal Luggage, Smutz’s, or Webb & Wolf Sporting Goods at 15 E. Market.
Today, luggage is purchased at big box stores; jewelry is bought over the Internet or from a myriad of television shows; and shoes are as disposable as paper towels — wear ’em out, throw ’em out, and buy new ones.
That is sad, indeed. But I still have my memories of the sights, sounds and aromas of the bustling downtown York business district.