Light pierces a dark and stormy night in Glen Rock 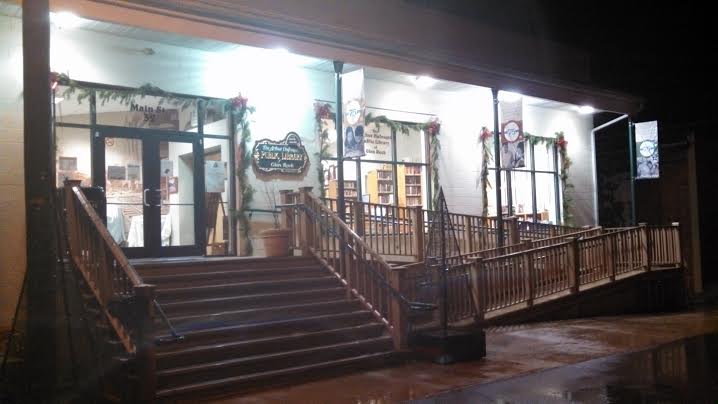 On a recent dark and stormy night, this illuminated building welcomed people passing through Glen Rock. This is the Arthur Hufnagel Public Library offering a welcome bright site and warm refuge against the elements. Not to get overly metaphysical here, but the light goes beyond what a warm room will do for the body. The brightness also goes to knowledge and understanding, all the good stuff that a library brings to the minds of community members. So Glen Rock’s library offered a warmth to body and mind on this recent night – and has done so for years. Also of interest: Rocks in the Glen turns into town where things happen. and Good night in Glen Rock, Part II.

Neat stuff from all over … .
A Central York School District student is making well-deserved national headlines for his Buddy Bench project. Young, achieving Central York students have been in the spotlight before.

And Central York made the news again recently when CY grad and Hollywood producer Neal Dodson’s film “All is Lost” was released.

Birthday party:  In case you missed, the 80th anniversary of the repeal of Prohibition made the news recently.

Hoke House’s future: Well, Rutter’s has weighed in on this landmark that has greeted visitors to Spring Grove, reportedly since the mid-1700s.

Famous recipient: PennLive has reported on correspondence that a Harrisburg woman enjoyed with Gen. George Patton in World War II. 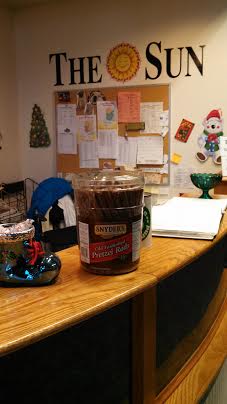 You can’t get away from York County, Pa. In Lowell, Mass., newsroom, this tub of Snyder’s Pretzels greets visitors, a welcome sight for this York countian on the road.