Farquhar Park pool: ‘Good grief, how long has that pool been here?’ 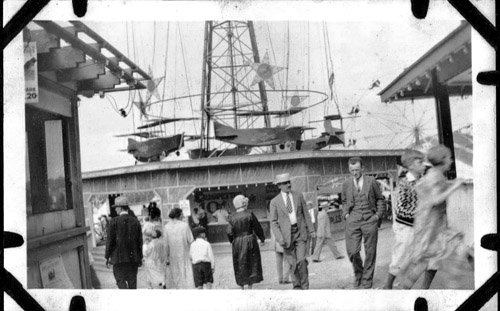 The White Rose Amusement Park operated near the Farquhar Park Pool, now site of Arthur Ferguson Elementary School. York Daily Record Jim Hubley explained that, despite of the fun the pool offered, it was often a site of controversy: “It was closed several seasons, locked by polio, Sunday blue laws, racial difficulties, political mishandling, even drownings.” This photograph is believed to show the park, courtesy of Yorkblogger June Lloyd’s family photo album.

The Farquhar Park Pool is drained and suitably feted for its years of service.
After the bulldozer does its dirty work, the YMCA’s Graham Aquatic Center will fill its void, complete with a 16-lane indoor pool with an accompanying outdoor pool.
The Farquhar Park Pool area has long been a center of activity – with the park next door, trolleys running nearby, and an adjacent amusement park thrilling thousands for years.
And the pool was the center of a racial controversy in the late 1940s after the city closed the pool rather than allow blacks the opportunity to swim there… .

The Boys Club later operated the pool, and people of all races eventually were allowed to swim there.
From that point of view, perhaps the racism long associated with this pool will be dumped and buried in the landfill along with its concrete.
Jim Hubley’s 2005 column gives a glimpse into the life of the 1920s vintage pool:

Beyond the fact that I am qualified to be one, I never have developed a passion for antiques or collectibles — junk, to my way of thinking.
Many friends are different and relish old things, enjoy seeking and collecting antiques.
They preach that anything which has existed at least 50 years or more must be considered rare, precious and, possibly and hopefully, valuable.
Humans formerly also were regarded as relics after reaching the age of 50, but today life expectancy has been extended a few decades or more, thank goodness.
So while antiques are not my thing I do respect humans, or even anything which has soared way beyond 50 years and still is doing all right.
I began to think about all this recently while driving on North Newberry Street, aside Farquhar Park on my left, the Ferguson Elementary School on the right and the sight of the swimming pool directly in front.
There were swimmers on that hot afternoon, and the thought struck me, “Good grief, how long has that pool been here?”
I learned to swim in that pool but haven’t been in it for many years. I am familiar with its somewhat rocky-road background, financial problems. It was closed several seasons, locked by polio, Sunday blue laws, racial difficulties, political mishandling, even drownings.
I followed with some exploring and was shocked. The pool was opened Thursday, July 8, 1922. A private group, Community Swimming Pool Association, was the owner. That was 83 years ago. It follows that the pool should command some respect for its age and should not be forgotten when historians write about important places in York’s history.
When I tell my grandchildren and great-grandchildren about that pool they know I am not teasing them. All they have to do is see for themselves.
However, when I try to tell them about the amusement park right beside the pool they scoff and say, “Come on. That’s a school beside the pool.”
I am certain there are countless other Yorkers and York countians who are not aware there once was an amusement park there.
Shortly following the opening of the swimming pool, the amusement park was erected, before Disney World, Six Flags, Hersheypark and other gigantic amusement havens of the current age.
The park had everything an amusement park required — plus a huge dancing facility, White Rose Crystal Ball Room. Within the open-air structure was a restaurant. No bars in those days of prohibition. The dance hall was oval-shaped with a high ceiling.
Top flight orchestras provided music as the big band era was just getting under way.
The pride and joy of the park for thrill-seekers, naturally, was its huge roller-coaster, which traveled over a right angle route with the usual thrilling long, steep drop, sharp curves and screaming passengers.
It was the ideal spot for a fellow to take a date and hold on tight to her, at 15 cents a ride.
There were airplane swings for the less daring, the banging vehicles known as the Whip, an arcade and a merry-go-round for the youngsters and timid elders. Admission to the park was free, as was parking.
It must be remembered private automobiles were not as numerous as today. Most patrons came from York and York County via trolley cars, none of which were less than two or three blocks away from the park site. That was one reason the park did not fare so well, too far to walk up hills.
There were many other factors which doomed the park, which should have become as popular as the pool.
Combined with the Great Depression, which later followed the park’s opening, was opposition to Sunday amusements by York religious forces, which demanded strict observance of Sunday blue laws.
Eventually, the park died a horrible death, rotting and deteriorating until the city bought what was left for $15,000. Later, the Ferguson school was erected, but the pool remains.
Truly, I must respect that pool for its old age because I suddenly remembered my parents took me to the pool the day it opened!