Rocks in the Glen turns into town where things happen, Part I 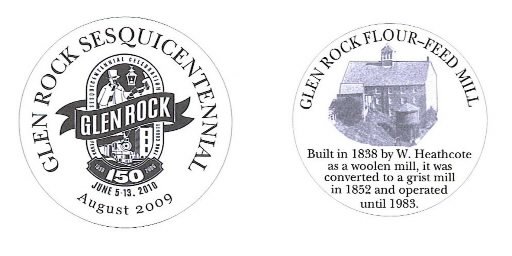 ‘Salute This Happy Morn,’ is a book on the Glen Rock Carolers. But it’s also a book on Glen Rock, a caption in this 1997 work surmises: ‘Perhaps these rocks near his house, exposed by the construction of the Baltimore and Susquehanna Railroad, gave William Heathcote (commemorated in souvenir wooden coin here) an idea for the name of the village he had so large a part in founding.’ Those tracks have been the site of train wrecks, excursion trains, and most recently, trains of bike riders on the old Northern Central Railway right of way in the borough. Background posts: ‘I really like these old pictures of Glen Rock’, Former CCC Camp now on the map and AMP’s and AMF’s alphabet soup spilled in same small town .

The accident is just one example of how Glen Rock has always been a newsy town.

Here are some insights into the town, as found in George Prowell’s 1907 “History of York County, Pennsylvania,” with my own comments in parenthesis:

– The entry of the Northern Central Railroad into town came in 1838, but not without considerable effort. The hard rock that had to be removed to lay rails into town caused the contractor to call the area “rocks in the glen” or Glen Rock.
– Simon Koller sold land in Glen Rock to Englishman William Heathcote, who came with fellow countrymen – the Shaws, Radcliffes and other Heathcotes. Glen Rock became an English town, which accounts for the later custom of singing English carols early Christmas Day. (Still, the town played host to Lutheran, German Reformed and German Methodist churches and only one English Methodist Church, which suggests it was not that English.)
– The town became a hefty manufacturing center, including housing a considerable number of furniture makers. George W. Geiple headed one of those woodworking outfits – Enterprise Furniture Company. The Geiple furniture name became linked with a funeral home, as in many small York County towns. (That funeral home operates today under the Geiple name.)
– The First National Bank of Glen Rock organized at a strange time – during the Civil War. (Until recently, two independent banks were headquartered in town – the Glen Rock State Bank and Peoples Bank of Glen Rock. A York Daily Record story in 1997 told about the chronically confused postal service and its misdirected mail, even after one of the banks changed its address to York.)

But back to train wrecks – or near train wrecks. Down the tracks in Seven Valleys in 1918, a train coming from the direction of Glen Rock crashed leading to no loss of life, but the loss of its load gave it the name: The Great Watermelon Train Wreck.
And a runaway locomotive from New Freedom in 1996 passed safely through the borough before stopping north of Seven Valleys. That incident is recounted in: The unsolved mystery of locomotive No. 1689.
Also of interest:
– Books about Glen Rock abound, and there’s a lot of history to write about.
– Museum goer: ‘I really like these old pictures of Glen Rock’.
– Parade Music Prince Roland Seitz: From Shrewsbury Township -Glen Rock to Friday Night Lights.
– Is mystery railroad the old Glen Rock-area narrow gauge?– Mystery of Glen Rock-area’s Narrow Gauge Road deepens.
– This time, entrepreneur in York County’s Glen Rock bet on the wrong horse.
– Glen Rock hilltop farm: ‘You cannot stay stressed here for long’.
– Add obscure marker to list of things to see in Glen Rock
– Glen Rock marked site of AMP/Tyco’s first Pa. plant .
– Foustown now a ghost town: Raid there once netted 300 barrels of quality firewater.