Good day at Black Rock: Church celebrating anniversary. But where is Black Rock in York County? 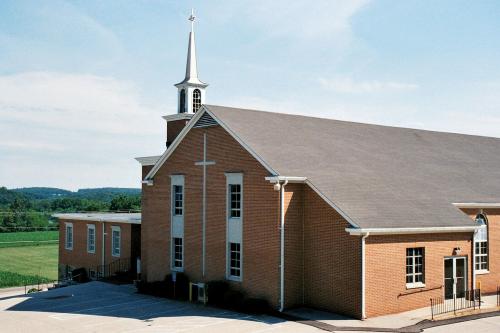 If you live in the York area, you might have to strain your brain to locate Black Rock on a map.

It’s west of Pierceville and south of Marburg.  OK, that’s no help because Pierceville is equally obscure, and Marburg is under the waters of Lake Marburg at Codorus State Park.

Let’s just say it’s almost in Maryland, but fortunately the Mason and Dixon ran their line south of this enclave of German Baptists in Manheim Township, southwestern York County. This map locates Manheim Township but check out Codorus State Park on any map. The township is right there and unincorporated Black Rock is near its southern base.

That band of German Brethren, sometimes called Dunkards or Dunkers? Those were the ancestors of today’s Black Rock congregation, led by Michael Danner about 1740, according to George Prowell’s “History of York County Pennsylvania.”

Early Brethren worshipped in homes and barns so sometimes it’s tough to pin down when such a group formed. Actually, some German Baptist groups around York County still worship in homes. The Amish would be one example of that.

“Black Rock village, largely composed of a settlement of German Baptists, is situated in the extreme southern part of Manheim Township near the Maryland Line. The Bachman Valley Railroad traverses the region. A.R. Wentz and Company carried on the mercantile business here for many years and was succeeded by Peter Lucabaugh & Son.”

So Black Rock was – and still largely is – a Pennsylvania Dutch settlement of farmers. It grew up around the church, so if the congregation is celebrating its anniversary, so is the village.

But here’s question that neither Prowell nor the “Gazetteer of York and Adams Counties” answers:

How did Black Rock get its name? If you know, please comment below.