Goldsboro is the largest rivertown along the Susquehanna’s west bank going downstream. York Haven and Wrightsville follow.
This rivertown history, mixed in with subsequent turnpike and railroad connections between York and Harrisburg, made the village a stage coach stop, a center for milling and cigarmaking.
Since then, Goldsboro has become known as the past residence of former Phillies player Greg Gross and Nobel Prize winner John Michael Bishop. … .

It is one of two York County towns that directs traffic around a circle with a monument in the center. (Jefferson is the other.)
It’s a village that is widely known for its post office, Etters (named after a former tavern owner). York New Salem (New Salem borough) and Codorus (Jefferson borough) are two others.
And recent census reports show that unlike many York County boroughs, it’s grown a bit in the past 10 years.
But its identity in the past 30 years has been shaped by its proximity to Three Mile Island, the nuclear power plant located on an island in the Susquehanna in clear view of the borough.
The accident at Three Mile Island also caused the spotlight to fall on this nearest York County town to the plant. And the crisis in Japan in the aftermath of the earthquake has prompted repeat visits by journalists to this small town along the Susquehanna.
What others say about Goldsboro’s beginning: George Prowell: “In 1738, Nathan Hussey, an intelligent Quaker from New Castle County, Delaware … obtained a grant for lands on which the borough of Goldsboro now stands, and a short distance above he opened a ferry across the Susquehanna.”
Population in 2000 – 939; 2010 population: 952. (Census 2010, York Daily Record/Sunday News.)
Incorporated: Aug. 23, 1864. (York County founding dates.)
Business:
How Goldsboro was named: The settlement’s station on York to Harrisburg railroad was named for J.M. Goldsborough, civil engineer of the York and Cumberland Railroad.
Quirky fact about Goldsboro: The town was known as Martinsville before the railroad coming through in 1850 prompted the name change to Goldsboro. People humorously came up with the Martinsville name from storekeeper Martin P. Burger.
Also of interest:
– York, Pa., Daily Record/Sunday News has aggregated a wealth of 2010 census information about Goldsboro and other York County boroughs and township. 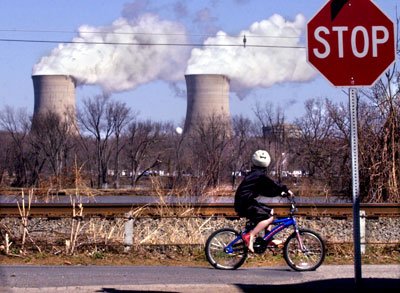 Goldsboro, with the always looming cooling towers across the way on Three Mile Island.
– Other posts in this The boroughs of York County series … .
Archives: You can always search for York Town Square posts on Google. For example, search for yorktownsquare and Winterstown and you get this.
Sources: George Prowell’s “History of York County,” “Gazeteer of York and Adams Counties.” Photos: “Hanover Area Pictorial Directory,” 1995.