‘Golden Age’ of riflemaking focus of Landis Valley exhibit: Linked in to history, 1/11/12 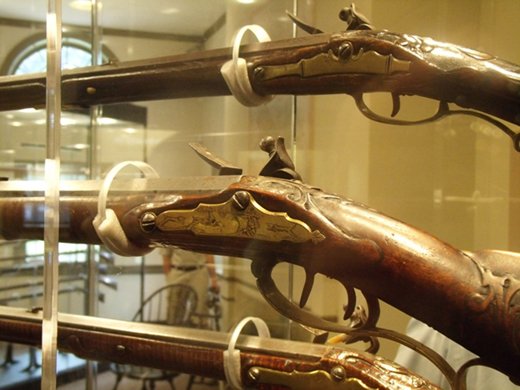 Landis Valley Village & Farm Museum keeping its Lancaster Long Rifle exhibit in place until June 10. The exhibit features 60 long rifles from the museum’s collection, other museums and private collections with a focus on the ‘golden age’ of rifle-making, 1740 to 1840. ‘The guns are exhibited in a chronological sequence, allowing visitors to view the progression from a short, stocky, Jaeger-type instrument, to a long, lean, elegant and effective hunting weapon used by those who tamed the frontier,’ a news release states. Pistols, powder horns and smooth-bore fowlers from that era are also exhibited. A museum spokesman said another exhibit like this isn’t likely to come around any time soon. The book ‘The Lancaster Long Rifle,’ by guest curators Patrick Hornberger and John Kolar, are available at the Weathervane, Landis Valley’s museum store. More about the exhibit on yorktownsquare.com: Lancaster Long Rifle. Also of interest, about York County longrifles: The Pennsylvania long rifle? Should have been.

Neat stuff from all over ….

Polish reenactors?: This is a little different. The Blue Gray Alliance’s 150th Gettysburg Reenactment will play host to foreign-born soldiers this year. “Gettysburg may be a long way from Poland, but it is not too far to travel for Piotr Narloch and his reenactor friends preparing for the Blue Gray Alliance 150th Gettysburg Reenactment. In September of 2012, Narloch made his first trip to the U.S. to participate in the Battle of Antietam reenactment. Recently, he contacted the Blue Gray Alliance saying he is bringing other Polish reenactors with him for the 5,000 mile trip claiming, “It will be my great honor, and me and my friends are very proud to join you, June 27-30 at Gettysburg.” Details: www.bluegrayalliance.org 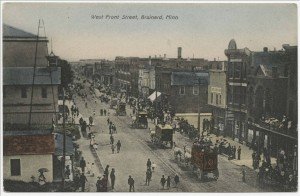 It’s nice to have a student of postcards on the YDR staff. Journalist Tim Stonesifer saw this postcard in a Strong Towns presentation this week and immediately had questions about some of the information surrounding it. Check out his views of this scene from Brainerd, Minn.