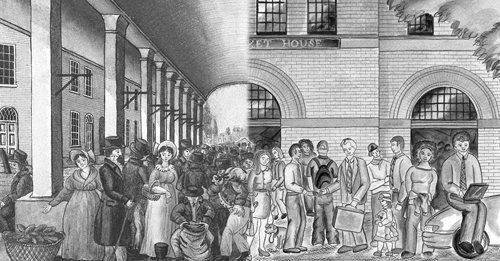 York County was blessed with engraver William Wagner, who drew the left part of this scene, and fellow artist Lewis Miller, who left a legacy of 19th-century scenes that tell us much about how people lived. (The right part is a circa 2000 drawing by York Daily Record artist Tracey Bisher Cullen.) The York County Heritage Trust, which owns many pieces by both artists, has published two books on their respective work. Background posts: Late June marks pivotal moments in York history, Striking architecture lined York’s South Duke Street and York’s western gate: One image says so much.

Continuing, our series of images that say a lot about York County’s past, posted in observance of the 400th anniversary of Jamestown’s John Smith, first English visitor to this region: …

In clear view: Market goers crowded York’s Centre Square market sheds as they had since shortly after the county’s founding. The market sheds joined the York County Courthouse and, later, another county building, the State House, in the square until 1841. In those years, the two buildings were demolished and a new courthouse built along East Market Street. But the market remained for about 50 more years.
Behind the scene: The presence of the market in the center of York, which is about in the center of triangle-shaped York County, shows the importance of agriculture to the county’s development. There, farmers could sell excess goods to a growing population. That the market sheds survived the courthouse in the heart of York shows the muscle of agrarianism and the decline in the importance of centralized government in the hearts of York countians.
Further details: Artist/engraver William Wagner drew this and other colorful scenes of York in 1830. His work has been compiled into “Views in The Borough of York & Vicinity” (York: York County Heritage Trust, 1996).
Posts in this series:
– 400 years ago, John Smith explored Chesapeake Bay – 1/31 iconic images
– Declaration signer James Smith tops York County patriot list – 2/31 iconic images
– Going to market a longtime York County pastime – 3/31 iconic images
– William C. Goodridge: From slavery to success story – 4/31 iconic images