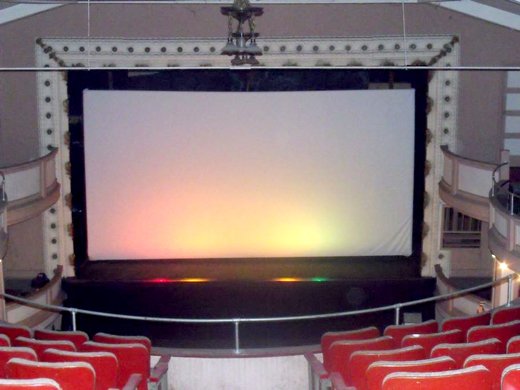 The Glen Theatre in Glen Rock, of course, is filled with stories and images. It never ceases to fascinate. Chalmers Sechrist, whose family has a long association with the museum, has supplied more info on York County’s last operating community movie theater, outside of York City. Also of interest: Parade Music Prince Roland Seitz: From Shrewsbury Township – Glen Rock’s Glen Theatre (his band hall) to Friday Night Lights.

John Hufnagel, who has supplied us with past stories about the Glen Theatre and Glen Rock, is back at it.

He asked Chalmers Sechrist as to why there is a door on the left side wall (facing the screen) and if there was ever an orchestra pit in the theatre, parade king Roland F. Seitz’s former band hall.

John also sent Chalmer some recent interior photographs of the theater, and that brought this response:

“Your e-mail brought back more memories about the Glen Theatre. That door on the side of the building was placed there when we moved into the house next door in 1946. Because Ted Logan purchased my father’s ‘Sechrist’s Garage’ in 1945-1946, our family had to move from the apartment above the garage into a new home next to the theatre. We wanted a short-cut between the house and the theatre. The attached pictures showed: new seats in the theatre, the absence of the old exterior box-office, a new wide screen, and an updated marquee.

“Initially, there was an orchestra pit and I remember the GRHS orchestra playing there during stage plays directed by GRHS Instructors ( Mr. Guy Mergenthaler, et al.) and the operetta “HMS Pinafore” directed by Mrs. Frock who was the Instructor of Music for the Glen Rock Schools and others. I believe she resided in Hanover, PA. And I had the pleasure of being involved in the plays “Deacon Dubbs” and  “Keep Moving”, during my Jr. and Sr. years. Also, one access to the orchestra pit was via a narrow stairway from the basement  and through a small door under the front of the stage.

“I almost forgot to mention the fire that occurred in the early 1940s. It was discovered by the Paul Stermer family who lived next door at the time. The late-night/early morning fire was confined to the stairway leading from the rear of the theatre to the basement. It was believed the fire was caused by a cigarette butt in the trash, that was not completely extinguished. The prompt response by the volunteer G.R. Hose & Ladder Co. avoided a major fire.”

Btw, if you want to experience this old theater, check out this weekend’s feature at the Glen. 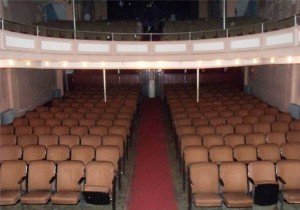