Glen Rock’s Roland F. Seitz: ‘By his genius … he has earned the title of ‘Parade Music Prince’ 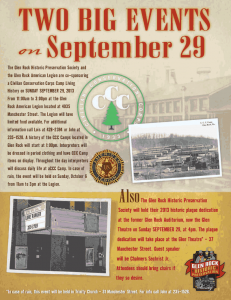 Then, as part of the evening, Dr. Lee Zelley, grandson of Roland Seitz, will speak.

There’s an opportunity to do so, courtesy of the Glen Rock Historic Preservation Society. That’s a pretty rich evening, and it’s a free event.

Here’s a short bio about Seitz, provided by the Glen Rock history group: 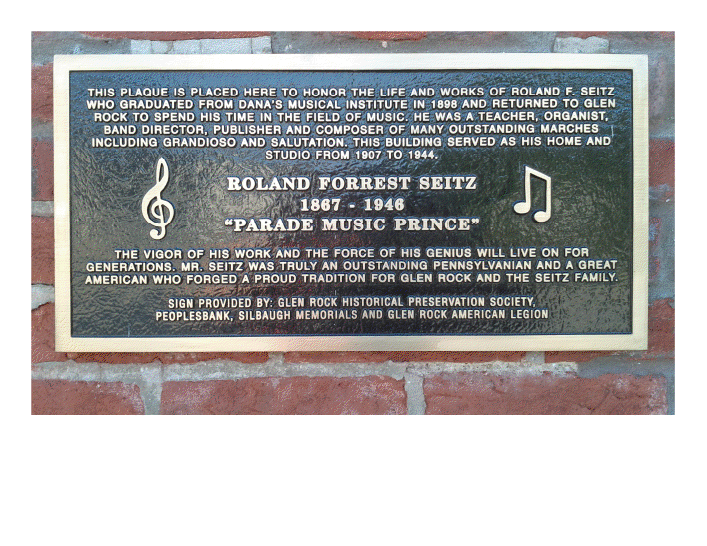 This plaque, on Roland Seitz house, was dedicated in 2010. According to the plaque sponsor – the Glen Rock Historic Preservation Society: ‘Roland F. Seitz who graduated from Dana’s Musical Institute in1898 and returned to Glen Rock to spend his time in the field of music. He was a teacher, organist, band director, publisher and composer of many outstanding marches including ‘Grandioso’ and ‘Salutation.’ The vigor of his work and the force of his genius will live on for generations.’

“From Southern York County there has come no man whose accomplishments are as notable or whose fame promises to be as endurable as Roland F. Seitz. By his genius of composing intricate, beautiful and stirring marches, he has earned the title of “Parade Music Prince”, and stands as an equal with Sousa, Goldman and other masters of the march. Long after the fortunes of others are spent and forgotten, his music will be played; long after the triumphs of others are over and done, his melodies will continue to brighten the lives of millions.

“We often wonder and debate in our minds just how certain talents come to exist and are developed in a certain family strain of people. For instance, the musical strain running through the Seitz relationship can be traced back to Johonnas Seitz, born in Barvaria, Germany and who was the great, great grandfather to Roland F. Seitz. Johonnas was educated in their best schools in the Arts of Literature, Music, and Wood Carving, coming to the United States in 1764, living near Hametown, York County, Pa., and dying in 1793.

“In Roland’s generation as well as the generation preceding and the one following his, the musical talent was very evident. On Flag Day, June 14, 1867, Roland became the last of eight children born to William and Magdelena Seitz, and he was only three years old when his father died. His education started in the only one room schoolhouse in the area that still today looks like a schoolhouse–Fissel’s, at the foot of the hill graced by Susquehannock High School. By unusual coincidence it was at Fissel’s School where his daughter, Charlotte, first taught after graduating from Millersville. When his education was completed, Roland was apprenticed to “learn his trade”, as a printer. He learned rapidly and well, and during his teen-age and young adulthood was a capable employee in the printing office of the Glen Rock Item and in 1888, he took over the music publishing business started by Joseph Dise in 1882. The July 23, 1897 issue of the Item announced that R. F. Seitz and Wesley C. Koller will open a music store.

“As a boy his musical talent was marked, and as a young man he gave a great deal of his spare time to the study of music and the development of this talent. His cousin, Levi Seitz, belonged to the Glen Rock Band playing bass. Levi had two sons musically inclined, one played Violin and the other played Organ. Knowing that Roland was interested in music, Levi invited him to his home and secured for him a flute. A band of Seitz’s was in the making. Levi’s two sons on Violin and Organ, with Roland on Flute and Levi playing bass on a Trombone. In a short time another Violin and a Cornet were added as well as two more Seitz’s. On occasion, Roland’s older brother, Dr. William C. Seitz also played with them. In time, Roland Seitz joined the Glen Rock Band, playing baritone and in later years Solo B Flat Cornet.

“At some point in his early manhood, Roland resolved that his life’s work was not to be among the type and ink and presses of the printing business, but in the world of harmonious sound which is music. Unfortunately, practical considerations delayed his acting upon his decision for several years. Coming from a poor family who could not assist him financially, and receiving a small salary upon which he lived and helped support his widowed mother, were factors which postponed his advanced musical education until he was 27 years of age.

“Enrolling in Dana’s Musical Institute at Warren, Ohio, in 1894, Roland worked hard and went totally without luxuries and occasionally without food to complete his four year course. In 1898, he graduated and received a Bachelor degree. On two subsequent occasions he was awarded honorary degrees by the Institute for his accomplishments in the music world, the first was the F. C. M. in 1903, and the second was the M. A. M. in 1924. Long after Roland had left Dana’s Musical Institute, Professor Dana, the school’s founder, cited to his students, Roland’s accomplishments in music by the barriers and obstacles he overcame and the application and hard work he did to achieve success.

“After graduating from the Institute, Roland returned to Glen Rock and spent his full time in the field of music, teaching all instruments except strings, playing in bands, serving 4 years as director of the Glen Rock Band, bringing it to a new level of perfection, serving as organist at Zion Lutheran Church, traveling on concert tours, composing and continuing to publish music. A February 3, 1899 ad in the Item states that “Roland F. Seitz will receive pupils on piano and organ, also teach thorough bass and harmony. From 10 to 15 minutes of each lesson on above instruments will be devoted to the art of reading music by chord, form and position. This plan will enable pupils to become good readers and know what they are doing. It is the stepping-stone to the intelligent use of music in any form.”

“In September 1901, Wesley C. Koller, manager of the band, took his employees and the band on a week’s vacation to the Pan American Exposition in Buffalo. On September 5, 1901, President William McKinley was addressing the crowd and Seitz, baton in hand, was only 20 feet away from McKinley when he was assassinated.

“The unusual aspect of this small town boy’s life is that he never left home to win fame. He was born in the Glen Rock area, attended school there and later penned many of his famous marches in a home that still stands in downtown Glen Rock at 26 Water Street.

“Occasionally Seitz would write marches for special groups or persons to whom he felt a loyalty or friendship. His Glen Rock High School March was written to provide music for a song composed by one of the graduating classes. His University of Pennsylvania March was written at the request of J. Monroe Stick who was the leader of that University’s band, in May 1899, he wrote “The Buggy King” march for Glen Rock’s own, Wesley C. Koller and The Pride of Glen Rock, which was written for the Glen Rock Band.

“Many musicians regard “Grandioso” as the most famous of the 43 Seitz marches. It has been suggested that he may have been inspired to write this piece of music while taking one of his early morning walks to Krout’s Schoolhouse (corner of Susquehanna Trail and Route 216 West) and back to Glen Rock, a walk of approximately six miles. Some point to “Salutation” and others to the two Brookes’ marches which Seitz wrote for his friend, Professor Thomas Preston Brooks, director of the world-famous Chicago Marine Band. During the European tour of this famous musical organization the concerts were always opened with “Brookes’ Chicago Marine Band” and closed with “Brookes’ Triumphal”.

“On January 23, 1902, Roland married Mattie Elverta Heathcote. In October 1907, Roland and Mattie purchased a home at 26 Water Street owned by W. C. Miller. It was in this home that their two children were born, namely: Nevin Heathcote Seitz, who became a physician in Hanover, Pennsylvania and married Kathryn Crowe and Charlotte Jane Seitz, who married George W. S. Zelley.

“In the fall of 1944, Roland moved to Union, New Jersey, to the home of his son-in-law and daughter, Mr. and Mrs. George Zelley, due to his health which had declined since the death of his wife, Mattie, on July 31, 1931. On December 29, 1946, at the age of 79 years, 6 months and 15 days, coronary thrombosis ended the life which had brought to earth some of the greatest music ever written.

“Although Roland F. Seitz was a mild and retiring man during his lifetime, the vigor of his work and the force of his genius promise to live on for generations. He was truly an outstanding Pennsylvanian and a great American who forged a proud tradition for Glen Rock and the Seitz family.

“The old adage “fame is a fleeting thing” can in no way apply to Roland F. Seitz. For as long as there are parades with bands playing such stirring marches as “Grandioso” and “Salutation”, that long will the fame of Glen Rock’s Prince of Parade Music continue unabated.” 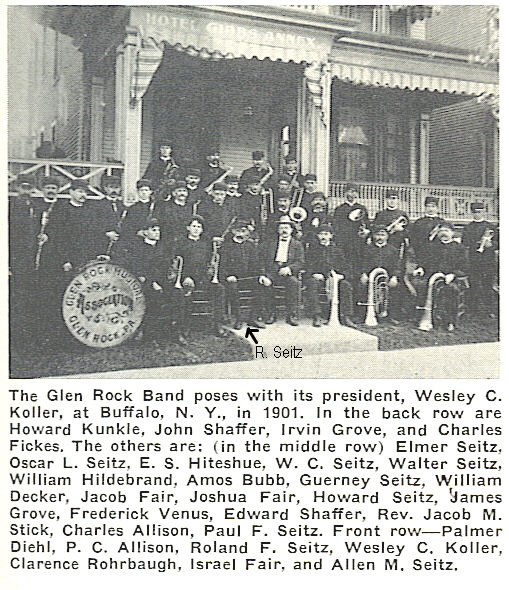 John ‘Otts’ Hufnagel, who provided this information, said the Seitz band was only feet away from President William McKinley when he was assassinated. He also noted how many Seitzes were in the band.