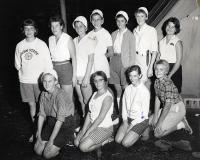 Rebecca Neiman Hickey, left, front row, is seen with other York County Girl Scouts at Echo Trail. She submitted this photograph as part of a Remember profile of Girl Scouts in the York Daily Record/Sunday News. “My memory is of the 1959 Girl Scout senior roundup, which was held in Colorado Springs, Colo.,” the 67-year-old York Township resident wrote. “It was the last . . . roundup to be held due to the Vietnam War. I was also awarded the Curved Bar Award, which was the highest award that a Girl Scout could receive at the particular time.” Also of interest: Finder of a book in a Girl Scouts series in York County: ‘I just wonder if any of the class of 1930 is still alive’.

The Girls Scouts are observing their centennial anniversary this year, and a York County borough has a leadership spot in that group.

“The first Girl Scout troop, designed to get girls out of the house and involved in community service and nature, assembled March 12, 1912, in Georgia,” a story in the YDR/YSN’s “Remember” series states.

The article, complete with video and audio accounts plus written testimony of Girl Scout experiences, is the most recent of about 40 topics explored in the Remember series.

The publication of the Girl Scouts profile prompted memories from Glen Rock’s historian John Hufnagel. The southern York County borough was reportedly the site of the first Girl Scout troop in Pennsylvania.

“Glen Rock is leader of the pack once again,” he wrote. “Saw the Girl Scout story in Sunday’s paper and know you sometimes take off on articles from the paper and had to pass this 1986 article for your info. Bertha has since passed away and so did Margaret Anderson mentioned in the story. You will see the story in the upcoming newsletter from Glen Rock Hist. Soc. … .”

Efforts to determine the first of anything is difficult. The Girl Scouts of America told the York Sunday News in 1986 that their archives don’t go back that far, but they have no reason to doubt the troop’s existence. At any rate, 1916 is a long time ago. 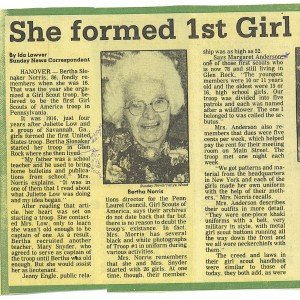 This York Sunday News story tells about 16-year-old Glen Rock resident Bertha Norris organizing what was reportedly the first Girl Scout troop in Pennsylvania in 1916. The story interviewed Norris, now deceased, about her experiences in starting the group, four years after Juliette Low organized the first troop in Savannah, Ga., in 1912.

A sampling of other topics in the “Remember” series:
– The moon landing
– Tropical Storm Agnes
– York County’s cigarmaking days
– The Great Depression
– Blizzards of 1993 and 1996