Glen Rock Mill Inn: ‘They are happy to see it open again’ 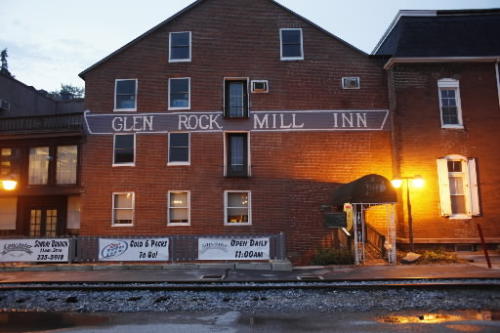 Riders on York County’s rail trail can ride past the venerable Glen Rock Mill Inn. The mill greeted numerous luminaries passing through the southern York County town when the Northern Central Railroad operated. That included Abraham Lincoln on his way to and from Gettysburg and Lincoln’s funeral train. Today, a rail excursion service, Steam into History, operates on those track. Background posts: Parade Music Prince Roland Seitz: From Shrewsbury Township to Friday Night Lights, Is mystery railroad the old Shrewsbury narrow gauge?, ‘Rocks in the Glen’ turns into town where things happen

That fact is underscored by the commanding downtown presence of what is today known as the Glen Rock Mill Inn.
It can also be argued from history.
Charles Glatfelter wrote in “Salute This Happy Morn: A History of the Glen Rock Carol Singers” that the town’s founder, William Heathcote, built a woolen mill in the late 1830s. The water power from the Codorus Creek and the coming of the railroad appealed to this Englishman, who had previously operated woolen mills elsewhere.
Heathcote was no farmer and willingly divided up his property, purchased a few years before from Simon Koller, and sold off lots.
“He must have sensed early the possibility that a town might be developed around the mill,” Glatfelter wrote.
The mill began operating in 1839 and so did the subdivision of his property.
Given the legacy of the most dominant mill in a mill town, it comes as good news that the Glen Rock Mill Inn is again an operating concern. A number of restaurateurs have operated the old mill in the past two decades.
Now, the converted mill has new owners as the following excerpted story from  “Spaces” magazine explains:

The building was erected in 1832 and endured many transitions — from a wool mill to a flour mill and then a feed mill. In the 1980s, Cecil Artrip transformed the industrial marvel into a restaurant.
Antiques adorn the walls and windows. A stream of water trickles through the structure to create a fountain. The basement is a wine cellar with a rotating bottle rack made from mill parts.
Cindy Duzan and Terry Steyer live about three miles away and dined there on occasion. When it closed in July 2007, they couldn’t stand to see it sit empty. Even though they are busy with day jobs — Duzan works for Social Security and Steyer in public education — they felt the need to purchase the property.
On Feb. 21, they sealed the deal. After three weeks of deep cleaning and a fresh coat of paint, the Glen Rock Mill Inn opened once again.
“It’s supposed to be the center of town,” Duzan said. “It has so much potential.”
With the help of Steyer’s children, David Carpin, Alyssa Quinteros and Maureen Carpin, they offer a full menu seven days a week in four dining areas.
The main dining room is filled with old photos of the mill, the fountain room welcomes guests with a cathedral ceiling and wall of windows, and the hearth room has a cozy gas fireplace with a mantel full of antiques. In addition to dining on the main floor, there is a wine cellar with tables for private parties or more intimate meals.
The restaurant’s stone walls and wooden beams radiate an inviting charm. Wooden tables and chairs topped with white linens create a polished look for a romantic experience.
In addition to the bar, dining rooms, a banquet room and an outside patio, the Glen Rock Mill Inn’s third floor has 12 guest rooms available for rent, including an executive suite.
Hidden through a separate entrance is the Heathcote Suite. A whirlpool tub, two fireplaces and a cupola with a view of Glen Rock make the room a sanctuary.
“It’s a work in progress,” Steyer said, “but we have a lot of ideas.”
David Carpin is the executive chef at Glen Rock Mill Inn. His vision for the menu is seasonal items with a few staples, such as crab cakes and filet.
“We definitely like to use as much local products as we can,” he said.
Crab cakes seem to be the most popular menu item.
“A lot of people are happy that the building is so historic,” Carpin said. “They are happy to see it open again.”