Glen Rock Carolers make the BBC: ‘We perform our carols … to preserve the tradition’ 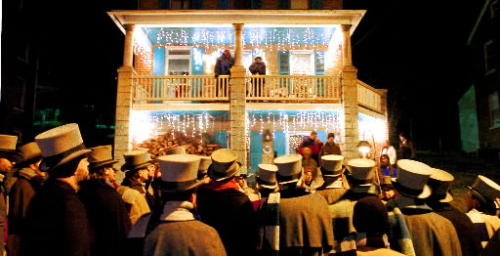 The Glen Rock Carolers will stroll the streets of their southern York County, Pa., town again after midnight on Christmas Day. Midnight and thereafter on Christmas Day serves as an interesting intersection of two quaint rites of the season in York County. About 15 miles north, the York Factory Whistle concert kicks off at about the same time. Perhaps some year, the two concerts could begin with the same carol at the same time. Now that would be a twist that would catch the ears of journalists around the world. The Glen Rock Carol Singers were featured on a recent BBC broadcast. Also of interest: The Glen Rock Carol Singers: They still dress like this in York County.

Glen Rock, and the Glen Rock Carolers, made the BBC recently in a piece on their musical craft titled ‘Folk Care Revival and Survival.’

Here’s a piece of the promo from BBC Radio’s website:

“In the seventh programme in his series describing the gathering history of the Christmas Carol in Great Britain Jeremy Summerly returns to the Gallery tradition that was squeezed out of 19th century Church worship but steadfastly refused to die. It’s now in rude health in several parts of the country but nowhere is it more energetically sustained than in South Yorkshire and Derbyshire. With the guidance of Dr Ian Russell who holds folk carol festivals and the enthusiasm of pub carolers who sustain the tradition Jeremy shares a pint and a clutch of fuguing carols which flower happily in the 21st century while having roots in the 18th and 19th.”

“He also finds out about an American offshoot of the gallery style that’s been preserved in the icy blasts of Pennsylvannia USA since it was first seeded there in the middle of the 19th century.”

The BBC piece included an interview with Darryl Engler, music director of the Glen Rock Carolers.

Engler told about the relatively recent discovery that the Carolers and modern-day counterparts in Britain sounded the same, although separated by decades.

“When we got here and we heard the sound of the carols and the feeling of the carols, it sounded the same, like we’ve never been apart,” he told the BBC.

Then he contrasted the carolers in Glen Rock and Britain.

In Glen Rock, men sing; it’s one day a year; happens outdoors and is run through the churches. In Britain, men and women sing; many days a year; mostly inside in the pubs and a secular custom.

“For each of our members,” Engler said, “it is an emotional and religious experience.”

In Britain, he noted, the caroling is a custom based on the enjoyment of singing.

In Glen Rock, a goal is for the tradition to continue.

“We perform our carols to the community,” Engler said, “to preserve the tradition.”

The Engler interview can be heard from about minutes 8 to 10 on the BBC recording. (But it looks like you’ll have to buy the CD.)

So what do you think?

The Glen Rock Carolers and York Factory Whistle give York County two quaint Christmas concerts. What if some year – though they are 15 miles apart – the two concerts start at the same time on Christmas Eve/Christmas morning with the same carol? Please comment below. 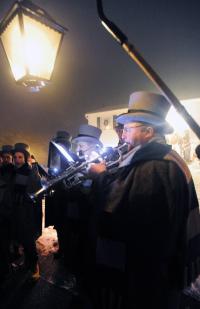 This photo and the one above come from York, Pa., Daily Record/Sunday News files, photos captured by journalists who braved the Christmas morning cold with the singers. Also of interest: Many of these posts touch on Glen Rock or the Glen Rock Carolers, in full or in part.