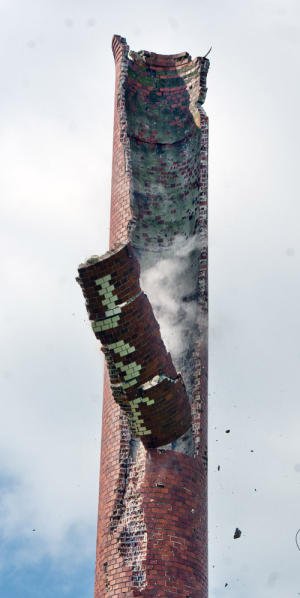 The last of the white bricks that spelled ‘Foust,’ namesake of the distillery hamlet of Foustown come down Tuesday. Some of the stubborn, lightning damaged stack was pulled down, with more to come. The owner plans to leave a sealed off stub for Glen Rock-area visitors to see. (See live coverage of the demolition. Also view a video of the demolition of the distillery that William Foust built below.) Also of interest: Foustown now a ghost town: Raid there once netted 300 barrels of quality firewater and Lightning also damaged smokestack at historic market in Hanover.

When young people take notice of history, that’s something to highlight.

So I noted with interest when the York Daily Record’s Teen Takeover staff member Ray Cwiklinski blogged about the pending demise of the damaged Foust distillery smokestack, saying a part of his childhood was going to be destroyed.

There is some nice writing in here. The top of the lightning-chewed stack “crumbled like a cookie in milk” and “it looks like a giant took a bite out of it.”

But a key point is that the loss of our historic sites impact people. Things have meaning, even a supposedly  forgotten smokestack at an abandoned distillery. Whether Ray is being ironic or serious, this point holds.

Here is a lightly edited version of Ray’s “The Tragedy of Brewery Foust(us),” complete with photograph:

“I just woke up this morning and found out that they want to tear down the chimney tower that used to be part of the old Foust distillery just outside Glen Rock. Apparently when I was out of town on the 14th, it was struck twice (TWICE!) by lightning, scattering bricks across the neighbor’s yard. Now, the top has crumbled like a cookie in milk. It looks like a giant took a bite out of it.

“I think all this is terrible news that part of my childhood is going to be destroyed. When I was little and I came home every day, I liked to look up at the smokestack standing tall next to a falling down barn. It was like the ruins of the Wonka factory or something. I always wanted to go play around and I thought it would be fun to slide all the way down inside it like Alice down the rabbit hole. I also liked it because it was a landmark that could tell me when I was getting close to home. It saddens me to see it go, but I suppose it’s necessary. If it gets struck by lightning again, the falling bricks might injure or kill someone, and that’s too big a risk to take. Maybe they’ll let me help tear it down. I would love to drive a wrecking ball truck or even use dynamite. (I’m not that sentimental.)

“I just went to visit it to take pictures. The chimney had crumbled down the center, so it was hard to read the name ‘Foust’, the name of the guy who built it all those years ago. Seeing it in person reminded me of the pyramids or something, a beautiful decaying emblem of a dead era.

“After writing this, I found out that NBC’s hilarious “The Office” will be coming to an end after its ninth season. And summer is almost over to boot. I have to wonder what great thing will end next. Amusement parks?” 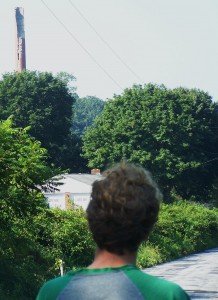 To read Ray’s posts, check out his entries at Teen Takeover.

A demolition team attacks the stack.