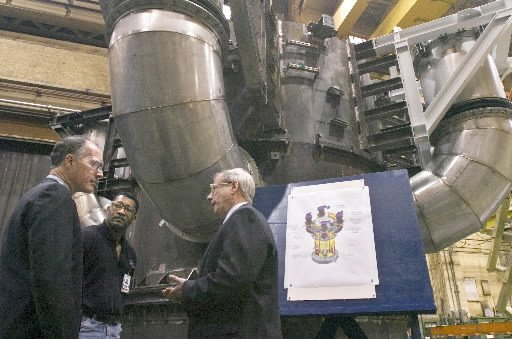 Want to debate the York County manufacturer of yore who left the most impressive legacy?

Two from the 19th-century immediately come to the top of my list: P.H. Glatfelter I and S. Morgan Smith… .

Glatfelter bailed out Jacob Hauer in acquiring the paper mill in Spring Grove in 1863. That mill became the hub of the paper manufacturer today that bears his name, headed by P.H. I’s great, great grandson George Glatfelter II.
Then another Jacob – Jacob Loucks – and other York Manufacturing Co. investors ran into tough times in the 1880s. P.H. stepped forward to bail out his brother-in-law, Loucks. (Jacob Loucks’ grandson and namesake outpaced him in legacy. Jacob Loucks Devers became a four-star general in World War II.) York Manufacturing went through various name and ownership changes, and the air conditioning/refrigeration company today is known as York International — actually Johnson Controls York.
Those are P.H.’s two prizes, among many other investments.
But Moravian-pastor-turned-industrialist S. Morgan Smith rivals Glatfelter’s legacy.
He was a key part of the early years of York Manufacturing.
That’s one.
But his own company, S. Morgan Smith, was an early manufacturer of washing machines and later made turbines, blades and other parts of the hydropower business.
In some permutation, S. Morgan Smith spawned Voith Hydro, American Hydro and Precision Components. The latter companies operate today.
That’s a four-company legacy.
Indeed, Precision Custom Components recently made the news when it borrowed money to position itself for the future. It seems to be a bright future. The company makes dry casks and other equipment used to store and handle spent nuclear fuel, a growth market.

Here is the York Daily Record story on Precision Components, 10/22/06:

Precision Custom Components has turned to a group of local investors to help fund the York-based company’s future growth.
A member of the Investors Circle of York has agreed to provide PCC with a $500,000 short-term loan, all of which the manufacturer will use to buy steel and other supplies needed for production, said Arthur K. Hendrix, vice president of human resources at PCC.

Last year, the Investors Circle of York pledged $250,000 to PCC. The company used that money to buy supplies and other types of inventory associated with the general growth of the business, Hendrix said.

Comprised of investors who wish to remain anonymous, the circle looks for equity investments that offer profitable returns with the best potential for job creation, said Jeff Baltimore, a business development manger of the York County Economic Development Corp.

The development corporation serves as the forum in which the 35 to 40 members of the circle meet to discuss potential investments.

A company looking to request funds from an investor within the circle first pitches its business plan to a seven-member mentoring committee. That group serves as coach, critic, screener and sounding board to the applying company.

The advisory committee ensures that the applying firm presents the appropriate information most important to the investors, Baltimore said.

While the circle evaluates between two to three companies per month, the group had only invested in between seven to 10 percent of applying companies since its inception in February 2005.

“The investors are very experienced and they are very money smart,” Baltimore said. “They do not enter into agreements lightly.”

If accepted, the company gets the capital its needs and, in return, the member investor may receive a stake in the firm. The deal between the two parties might involve favorable negotiated terms that may include ideas offered by the investor aimed at improving the firm.

Last year, Precision Custom Components became the first company to present a business plan to the Investors Circle of York.

Canisters and pressure vessels also top the list of what the local plant turns out.

The company’s clientele hails from both the commercial and government sectors. For example, in the past, PCC manufactured some of the dry casks that currently house Peach Bottom Atomic Power Station’s spent fuel rods.

This year, the company’s number of orders, both commercial and government, have doubled compared to the past several years, Hendrix said.

Since 2004, the company has added 107 workers for a total of 230 employees to keep up with steadily increasing demand.

Hendrix said he attests the growth to ordering companies that are increasingly more willing to invest in capital expenditures.

The federal nuclear repository in Yucca Mountain in Nevada, where spent fuel is expected to be stored deep underground, is not expected to open until 2018. For that reason, more nuclear-powered plants will need dry casks, such as the ones made by PCC, to house spent fuel pulled from reactor pools, Lyons said.

Within the next 10 years, more than 2,000 dry casks loaded with spent fuel will be housed at different sites around the country, she said. Currently, that number sits at more than 830. She said it makes sense that PCC’s orders have doubled.

“The cask industry is growing rapidly,” she said.