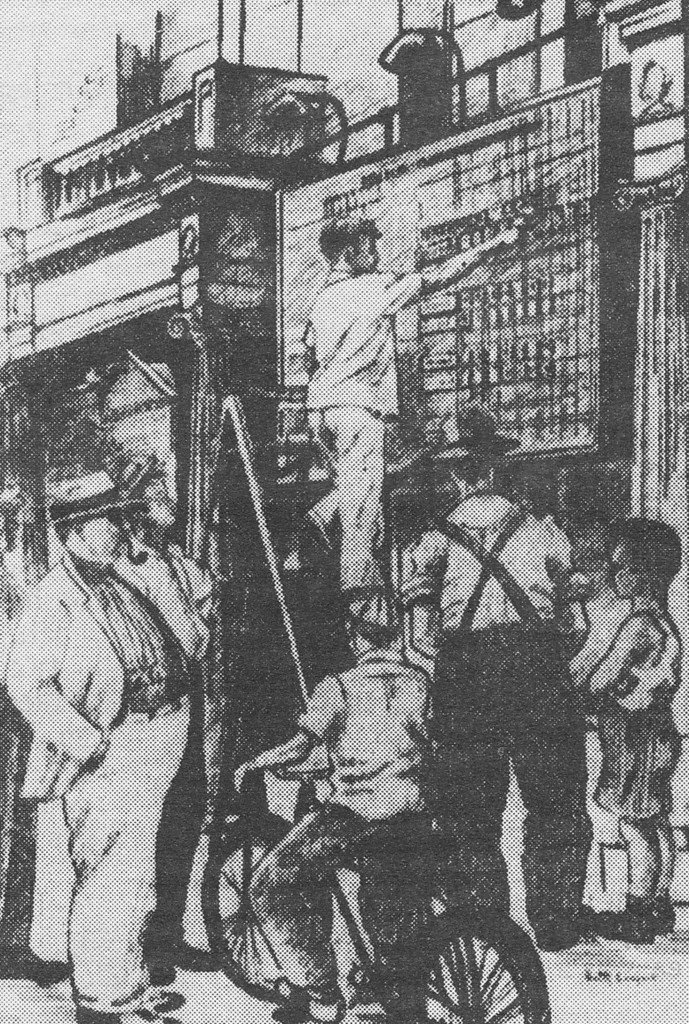 The look and feel of ydr.com, the York, Pa., Daily Record/Sunday News’ flagship website, will change next week, something that has happened every three years or so since the site was introduced in 1996. The immediate posting of local news and events from all over the world today comes in contrast with the slow, manual posting of scores and other news on the front of the Gazette & Daily’s East King Street building in York before World War II. Also of interest: Giving York County news, sports junkies their due, Part I and Part II.

One morning about 20 years ago, a group from the York Daily Record traveled to an upper floor of The Wolf Organization’s West Market Street building.

That floor in the former Wiest’s Department Store housed the computer of The Network Inc.,  a Wolf subsidiary that provided computer services to its parent as well as sold business-to-business services to outside companies.

Editor and Publisher Dennis Hetzel led our delegation in meeting with David Dreyer and (now Democratic gubernatorial candidate ) Tom Wolf of The Network about possible joint ventures. The YDR had the content, and the Wolf company had the means to distribute that content digitally on the World Wide Web, then growing in popularity.

David Dreyer, The Network Inc., president, was particularly excited that day. He took us to a computer and told us we were seeing the future.

He showed us a browser editor for the first, or early, version of HTML, the language used to create content on the World Wide Web. As I recall, we saw a few words emerging on a colored background – some form of test pattern. The significance of all this was lost on us.

David explained what we were seeing. You could “mark up” stories and photos with HTML,  and they would attractively appear on that browser and 1,000 others simultaneously. So you could immediately distribute that information around the world. That could include advertising to pay for gathering and posting that content.

We kind of blinked at this first look into cyberspace. Such a delivery of news seemed so remote at a time that delivery via newsprint was widely accepted and profitable.

David Dreyer clearly saw the future, and we caught enough of it that we slowly started developing a YDR website. About three years later, we launched that site bearing content that could be read on a computer screen. Its introduction came as the Blizzard of 1996 raged outside, making delivery of the newspaper impossible.

So we turned on the switch, called radio stations to let our readers know that they could see the next day’s news about the storm that very night on the York Digital Record.

After that, teams from the YDR continued to develop ydr.com, as our flagship site became known. It was mainly done on the side, as our enthusiasts had time. One time, a team changed the design of the site – the way the site looked – without informing top editors.

It was that informal.

But that entrepreneurial spirit was the key ingredient in the success of ydr.com. It was created in and sustained by the YDR newsroom at a time when many newspapers were assigning internet teams to offsite, windowless offices, leaving their newsrooms with little digital ownership.

It was lonely in cyberspace in the mid-1990s.

Cyberia was the best-known York business pushing Internet services in those days, and company president Adam Viener would join David Dreyer on a short list of Web pioneers in York County.

The web became an integral business venture after 2004, about a decade after our meeting with Tom Wolf and David Dreyer. At that point, the York Daily Record/Sunday News moved to our West Manchester Township plant to shake hands with technical and advertising specialists at the York Newspaper Co.

We started adding what we call verticals – specialty sites that appeal to targeted groups. So we stood up Flipsidepa.com and Yorkblog.com in 2005, and GameTimePa.com in 2008, among other initiatives.

Meanwhile, we kept improving ydr.com, adding stories and photos – and upgrading its look.

It grew into a site that draws more than 400,000 visitors a month, who view about 2 million pages. The advertising placed on this site and our array of digital and social media products comes to about 25 percent of our revenue. That percentage is growing, as online content and advertising represents the YDR’s future.

So, we come to this week, when we’ll roll out another change in the look and feel of ydr.com.

This time, our bosses know about the change.

I have thought about our early 1990s meeting at Wolf’s many times as our ydr.com redesign has progressed.

I think about those words on the screen as we peered into cyberspace, and wish I could recall what they said. They could have accurately reported, “Wake Up! Your world is changing,” because that’s what happened that day, 20 years ago.

And that change has been good, for it has led to our future.

Viewers of ydr.com will find next week:

– The popular Media Center photograph galleries are easier to find.

– The most significant stories, photos and videos of the moment can be more immediately found.

Other upcoming improvements at the YDR

– This week, “Start your day here” feature will be introduced on Page 2, giving you the top stories of the day, photograph of the day and other helpful information.

– In October, the York Daily Record/Sunday News redesign – a change in the look and feel of the newspaper – will be introduced.

– In the background, the York Daily Record/Sunday News is installing a new content management system. That’s the main computer system that allows us to produce the newspaper and update the Web.

– We continue to improve GameTimePa.com. You can now find coverage on GameTimePa of 150 high schools across the state’s southern tier, from Fulton County in western Pennsylvania to the Pennsylvania/New Jersey line.

This is a ‘screen grab’ of ydr.com, introduced to the public in the middle of the Blizzard of 1996.