Hanover’s Gitt Mansion: ‘You can look down and see the town laid down before you’ 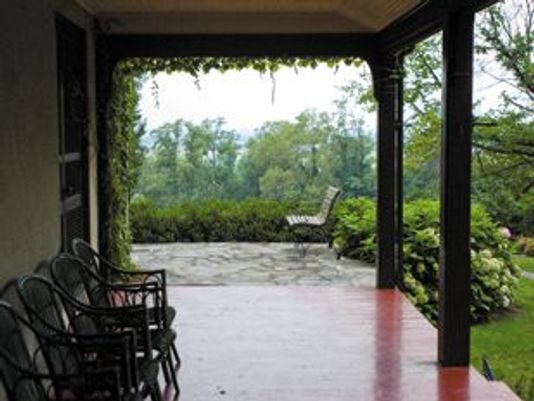 This view comes from the porch of the Gitt Mansion, although its owner, The Gazette and Daily’s J.W. Gitt, spent much time in its library. Background posts: Old York newspaper won’t die or fade away, Gitt and his Gazette sported same eccentricities and Two ornate mansions that Hanover Shoe built.

J.W. Gitt would ride the trolley to downtown York from his estate on a hillside outside Hanover.

He would oversee a left-leaning newspaper that would cause waves locally and across the oceans.

He would play some golf and then catch a trolley back to the tranquility of his Hershey Hill mansion.

There, he would spend evenings in his large library re-equipping himself to fire darts the next day against the Cold War. 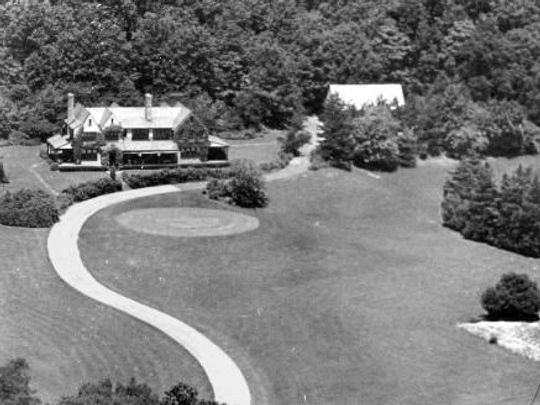 If you weren’t paying attention, it would be easy to drive right by the Gitt mansion on Route 194 in Hanover, York County.
Or, as Sandy Rebert likes to call it, the Gitt house.
For her, the stone structure is filled with fond memories of visits to her
family.
“We used to go tobogganing and swim in the pool,” said Rebert, one of four grandchildren of J.W. and Elizabeth Gitt and part owner of the house.
J.W. Gitt owned The Gazette and Daily of York, the predecessor to the York Daily Record/Sunday News.
He and his wife built the mansion as a summer house in the late 1920s, Rebert said.
The Gitts soon started staying later each year, but it wasn’t until they installed solar heating panels that they decided to live there full time.
“My grandparents were both very environmental. They were ahead of their time,” Rebert said.
The floorboards in the home were made out of recycled railroad ties from Harrisburg, and the walls were made of plasterboard.
But what makes the house is its view of Hanover, according to Bruce
Rebert, Sandy’s brother.
“You can look down and see the town laid down before you,” he said.
Looking out from the deck is a serene scene: a putting green and an in-ground swimming pool built in 1929 and a variety of native trees and flowers.
“We don’t think of it as a mansion, because it is very informal,” Bruce Rebert said.
The family has made good use of the home, per their grandmother’s wishes. “The house was set up as a nonprofit in grandmother’s will,” Bruce Rebert said.
Now it’s used for weddings, business meetings and seminars.
The home, which holds the Gitt Memorial Library, houses hundreds of books, which are still used by writers and researchers.
“He always said, ‘I can’t write about it if I don’t know about it,'” Sandy Rebert said of her grandfather.
The descendants of the mansion decided to keep the library intact by starting a trust.
“Our generation hopes to continue with it,” Sandy Rebert said.