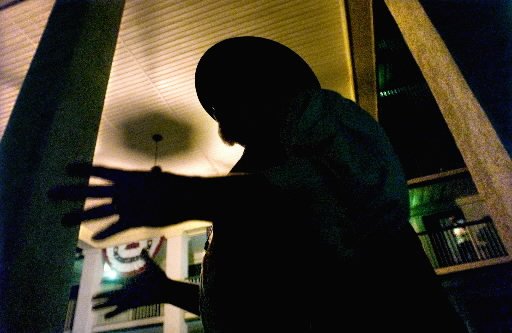 A Gettysburg tour guide acts out part of a ghost story about 10 years ago. National Park Service and Gettysburg officials are addressing the growth of the ghost tour industry on or near hallowed ground. Background posts: If you want to see the Murals of York up close … and Could York bus drivers also point out historic sites? and ‘… A shadowy figure of a hoop-skirted woman…’

Those capitalizing on the Gettysburg paranormal trade are running into tough embargoes.
Real history isn’t enough for some in Gettysburg. They invent ghost stories and then sell it on and around one of the nation’s most honored places … .

And this ghost story craze has bled to history-rich York as well, as reputable historical organizations foster such events.
A recent York Daily Record/Sunday News editorial puts this tourism-at-all-cost industry into perspective:

Note to Scooby-Doo and the rest of the Mystery Inc. gang: No ghost hunting in Gettysburg – or at least not on the battlefield.
Same to Bill Murray and the rest of the “Ghost Busters” crew.
The National Park Service doesn’t want any of your silliness on the battlefield, the solemn site of one of America’s most horrific and bloody battles.
Unfortunately, the town and the battlefield have garnered a reputation among the superstitious as a good place to hear creepy stories involving the ghosts of soldiers killed in the Civil War.
Ghost tours are regularly scheduled in the town – and October has become one of the most popular times for tourists who come looking for a Halloween scare.
Recently, ghost tour operators clashed with the borough over rules about how many people could be included in the tours, which some say have become disruptive.
The whole ghost tour phenomenon has become an embarrassment – a sleazy exploitation of a solemn, dark moment in our nation’s history.
So it’s good to see that at least the National Park Service is not playing along.
Officials have basically banned the ghost tours from the battlefield, leaving tour operators to traipse around town peddling their ghoulish yarns.
It was also good to hear that the park service will not allow ghost hunting on the battlefield come June – Friday the 13th and 14th – when a paranormal summit comes to town.
The G4 Summit is expected to attract more than 500 paranormal investigators to town to, well, do whatever it is ghost hunters do. Set up their electronic contraptions and infrared thingamajigs to capture some “evidence” of spirits.
Well, they’ll have to do it in town, too, because the park service says no ghost hunting on the battlefield – though the organizer of the conference says he suspects many ghost hunters will go searching on the battlefield.
And he won’t discourage them.
Well, maybe some extra patrols on the battlefield those nights would.
It would be far better if conference attendees came and experienced the tremendous history the site has to offer – of a time and conflict that could have exorcised The United States of America. That was the real fright of the Civil War, that our nation could have been destroyed.
Besides, there’s no such thing as ghosts – just human beings dressed up in creepy masks.
Zoiks, even a cartoon great Dane could tell you that.

For a score of posts on a York County superstition – powwow healing – click here.