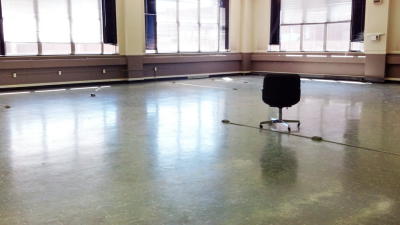 This room in the former Wachovia Bank building will house a relocated Electric Map, shown for decades in Gettysburg. Hanover businessman Scott Roland also plans to build a separate map showing the Battle of Hanover. (See photograph of Scott Roland and another acquisition below.) Also of interest: Gettysburg’s old Electric Map in storage: Check out these photographs.

The Gettysburg Electric Map, orienting folks about the Battle of Gettysburg, will soon become a newcomer to York County.

The Hanover Evening Sun reports that Hanoverian Scott Roland, who won the 12-ton, asbestos-laden map at auction, plans to create a tourist attraction at a recently acquired former bank building in Hanover.

Plans call for a sister map of the Battle of Hanover to go up nearby.

If this all works, it could prove to be an effective means to call attention to the cavalry clash in Hanover, which produced 300 casualties and slowed Confederate Gen. Jeb Stuart’s return to commanding Gen. Robert E. Lee’s main force. It’s a case of the full moon benefiting from the brightness of the sun.

All this makes you wonder why it took years for this to happen.

If Hanover draws 10 percent of the couple hundred thousand visitors who annually viewed the Electric Map presentation, that would be a good crowd.

If this works, maybe local folks can look at relocating the abandoned Gettysburg Cyclorama building to York County soil.

OK, that’s a little far fetched, but we’re glad to have the Electric Map in York County.

After all, the Philadelphia-area native can still remember riding to Gettysburg as a kid. He was about 11 years old and on a Boy Scout trip to get a badge, or a certificate, and the details run together.

But he remembers the Electric Map.

The 12-ton, plaster-and-wire map of the Gettysburg battlefield greeted Roland as is did countless others who came to learn about the battle, lighting up the room and offering a booming soundtrack. Unlike those thousands of tourists, though, Roland can now boast of another map connection: He owns it.

The local developer admitted on Saturday that was more than he wanted to spend, as he spoke of the map he won at online auction Friday night and joked about checking to make sure his credit card would cover it.

Roland was also checking the building where he plans to put the 30-foot square map, the former Wachovia Bank building on Carlisle Street he bought in May.

The move is part of a plan to create a downtown heritage and conference center, a plan that’s drawn fire from some who say it’s not feasible and right now exists mostly in the minds of planners seeking to change the fortunes of the Hanover business district.

But the plan does exist.

“Oh man, you can see it. You can hear it, can’t you?” he asked, his voice echoing across an
Advertisement
empty room and off the bare walls. “The lights blinking. The sound of the cannons, just booming away.

“This is going to work here.”

Like many, Roland read about it last week. He had no idea.

The Electric Map, nearly destroyed because of its asbestos content, was put up for bid last Friday. There was little fanfare, save for a handful of newspaper stories and other reports about the map going to online auction.

Rather, that was the asking price. But for several days the map didn’t receive a bid.

Roland indicated early in the week he planned to bid.

The plan, he said, was to win the map for a few hundred dollars and bring it to Hanover. From there it could easily be the centerpiece of that proposed conference center debated in recent months.

A second bidder – one of only two who bid and unnamed by the government website conducting the bidding – jumped into the fray, quickly pushing Roland up to more than a few hundred dollars. Then, to more than a few thousand dollars. When it was over, Roland had spent in excess of $14,000.

“I guess I could just see it in here,” he said on Saturday, light streaming into the former bank building’s former conference room. “I wanted to make it work.”

So the plan progresses.

Along with restoring the Gettysburg Electric Map, Roland plans to build a new one.

The Hanover Electric Map will be smaller but similar in design and scale to its 50-year-old predecessor, and will detail in lights and sounds the events of the Battle of Hanover. The two will sit side by side, albeit with the one from Gettysburg a little off to the west.

“I always tell people before there was Gettysburg, there was Hanover,” Roland joked. “Just ask J.E.B. Stuart.”

The Electric Map was listed for sale online at General Service Administration auctions, and the first word in the listing was “SCRAP.”

The government wanted to destroy it, Roland said. No question.

There were forms and waivers and a pile of paperwork to fill out about hazardous materials concerns, Roland said.

“It’s like we were trying to buy nuclear waste here,” he said. “They didn’t want anyone to buy it.”

Chief among the government’s concerns is the map’s plaster coating, which officials have said contains 3 percent friable asbestos.

The National Park Service in Gettysburg has declined to comment about the map’s sale. After securing a waiver for it to go to auction, officials there have said only they wish the winning bidder good luck, adding in a Friday night release the purchase would save the Park Service $32,000 in disposal costs.

That’s fine with Roland, who said as a property owner and developer he’s taken his share of long shots.

It’s part of being an entrepreneur, he said.

Roland said he’s been told the map, which has been cut up into four pieces and placed in storage containers, is being stored at a site north of Gettysburg. He has 30 days to remove it from the containers and take possession.

It’s still very early, but the plan is for a team of engineers to determine how best to carefully move the map, which dates from 1963, onto trucks to transport it to Hanover. Any asbestos issue will be handled properly at that time, Roland said.

“It’ll work,” he said, two hands on the window sill and looking out over Hanover. “I know it will.”

The building, and the future

Sometimes, people don’t quite know what to make of Scott Roland.

When he came forward along with the local Chamber of Commerce to propose a new conference center as a cornerstone of downtown revitalization, people questioned his motives. When he bought the former Wachovia building at 22 Carlisle St. for $200,000 through his company Blue Ridge Holdings, they asked the same things.

The Wachovia building was initially identified as one of four potential sites for the center. Roland has since been vocal in his desire to use it for that purpose.

“That’s what we bought it and are holding it for,” he said.

There’s room here for a conference center downstairs, Roland said, pointing to a teller counter that could be removed, and then to the old vault, still intact and the perfect place for a unique VIP dining room.

There’s a great view from the roof too, he said a few minutes later, turning 360 degrees to take in downtown under a cloud-dappled sky.

But there needed to be something else- a spark.

“That’s where our map comes in,” he said.

Roland said the hope is in a year there would be significant progress, both in restoring the Electric Map and better formulating exactly how it should be presented. The map as initially designed sat only a few feet off the floor, with risers around it. Any new presentation will have to address similar concerns with practical seating.

And of course there’s a financial issue. Roland said without seeing the map firsthand, there’s really no way to tell what the costs might be. One preservationist recently put the figure at $100,000, something Roland said wouldn’t surprise him.

He knew that going in.

But there’s certainly a chance it can be done for less, Roland said, offering a glimpse of the optimism that pushes him forward, and perhaps can help push forward what many still call a long-shot project.

For now, there’s a big kid who can still hear the battle sounds in Gettysburg, and who wants to talk about what the Electric Map might this time bring to Hanover.

There’s light twinkling through the windows, and booming off the walls there’s a voice.

“This is going to be really, really cool,” Roland said. “This could really be the thing.” 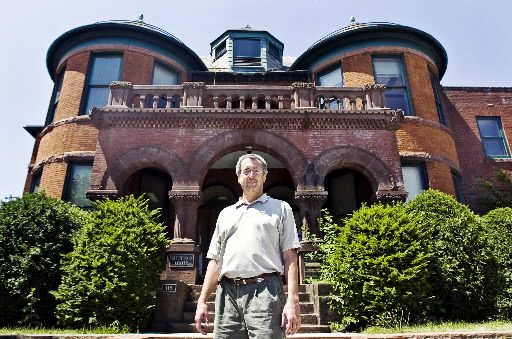 Scott Roland purchased the Young Mansion some time ago. He plans to construct the Electric Map in a separate building.