Gettysburg’s old Electric Map in storage: Check out these photographs 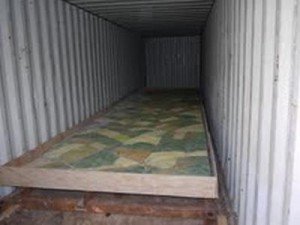 A portion of the Electric Map sits in a storage container, one of four, at an undisclosed site. The map was carved up into sections when it was dismantled more than a decade ago. (See additional photographs below). Also of interest: Remember the Electric Map in Gettysburg? It is in storage but may soon be disposed of.

You’d sit in the now-demolished amphitheater at Gettysburg National Military Park and hear the rather boring announcer tell about the Battle of Gettysburg as those little lights blinked.

By today’s standards, it was dull. But everybody remembers it.

Well, you can own that very map.

It’s up for auction, details at a government website.

There are warnings about asbestos and such, so you’d have to contend with that and its transportation to your new quarters. And it weighs 12.25 tons.

But you could have the map.

All this according to a recent story appearing on ydr.com and eveningsun.com.

If you have an extra $5 in your pocket you might be able to buy a 12-ton piece of Gettysburg history.

Only thing is, you’ll probably have to drop another $100,000 or more to refurbish and display the beloved but beleaguered tourist display.

The Electric Map is currently up for auction through General Service Administration, an online auction site for federal property, according to an email from National Park Service spokeswoman Katie Lawhon.

As of Saturday evening, no one had placed the opening bid of $5.

The map – nearly destroyed because it contains asbestos but saved for auction after an outcry from preservationists – was put up for bid last Friday, according to the Park Service. Gettysburg s Electric Map, which dates from the 1960s, is currently up for auction online after approval of a waiver that kept it from being destroyed because of its asbestos content.

Brendan Synnamon, president of the Gettysburg Battlefield Preservation Association, said Saturday afternoon he didn’t know the map was up for auction. Synnamon was among those pushing to save the map, which was added to the old visitor center in 1963 but contains about 3 percent friable asbestos in its plaster surface.

The Electric Map likely won’t bring a high price at auction, he said, but added the associated costs of transportation and storage could be considerable.

The Park Service has not disclosed where the Electric Map is being stored, but has said the 29-foot square map was cut into quarters and placed into four large shipping containers. Images that accompany the online auction listing show such containers.

Synnamon said his group hopes to be a part of restoring the map, and perhaps updating it with new technology. Old electronics could be replaced, he said, and the miles of wire that made the map work could be simulated with LED and other devices.

The map used hundreds of miniature light bulbs to depict troop movements during the Battle of Gettysburg. It was added as part of the commemoration for the 100th anniversary of the battle.

In June the Park Service announced federal authorities approved a waiver request allowing it to be auctioned instead of destroyed.

Synnamon said the important thing is that it’s saved as a teaching tool for another generation. That’s a process that could cost $100,000 or more, he estimated. But it would also bring back a unique piece of local history.

As I write this, people have 2 days and 13 hours to bid on the map.

What’s the map’s fate if there are no bids?

“FAILURE TO COMPLY WILL RESULT IN TERMINATION OF CONTRACT, OR IF NO BIDS ARE RECEIVED, THE MAP WILL BE DISPOSED OF IN A CERTIFIED HAZARDOUS WASTE LANDFILL AT GOVEERNMENT (sic) EXPENSE,” the auction site says.

That would be a sad ending for a dull, but exciting attraction familiar to millions for decades. 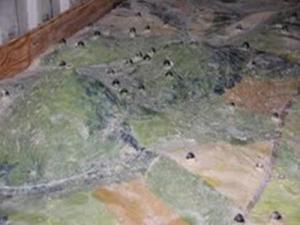 A more detailed look at the map in storage. 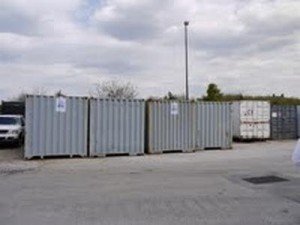 The four storage containers bearing sections of the map, according to the GSA Auctions website.