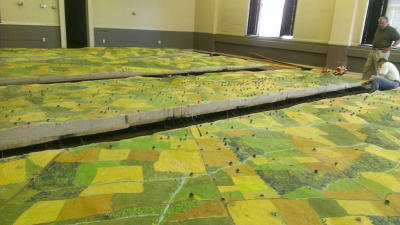 The old Gettysburg Electric Map is fascinating. For one thing, this photo from its new home in Hanover shows the size of the map at ground level, 29-by-29 feet. And the new owner, Scott Roland, is rewiring the map so the lights can be change from the top instead of from under the map, according to the Hanover Evening Sun story: Electric Map of Gettysburg coming together in Gettysburg. Which raises the question. How many lights are on the map now at the old Wachovia Bank building in Hanover? In their day, the lights showed troop movements on the three days of battle. Also of interest: Old Electric Map lifted up, then settles into new Hanover home.

Ren Davis is researching and writing a book on George Alexander Grant, the first chief photographer for the National Park Service, 1929-54.

“I have a photocopy of the 1900 census for York County, PA that lists his father, George Ernest Grant, as working for _____[illegible] steam ferry Co. It appears that the first letter of the company name may have been an “L” or a “T”, but difficult to tell. Is there a contact that may shed some light on what ferry company this may have been. An earlier biography of Grant noted that his father [George E.] was a school superintendent, so I am trying to get clarification.”

“The only ferry in this area at this time, as far as I know, crossed the Susquehanna at Wrightsville (to Columbia and back.) The York County Heritage Trust might have photos and info: www.yorkheritage.org. Also there are good local historical
societies in Wrightsville, Columbia and Rivertownes U.S.A. You could query
them.

I gave Ren the addresses of two yorktownsquare.com posts about the ferry. One was part of an Heritage Trust exhibit some years ago and the other are memories from Dr. Philip Hoover’s autobiography.

If you can help Ren, contact him via email.

Natural disasters revisited: This email got my attention: “We’re Pennsylvania history buffs who started a small blog – HistoricNaturalDisasters.com – and we are finishing up a photo project for the Centennial of the 1913 flood that devastated the Midwest.” That’s one to check out.

Legends and lore: A Middletown author, David Puglia, has penned a book “South Central Pennsylvania Legends and Lore.” It covers York County’s Hex Murder of 1928, among other regional stories. Yorkblog’s Book Buzz tells us about the new book. 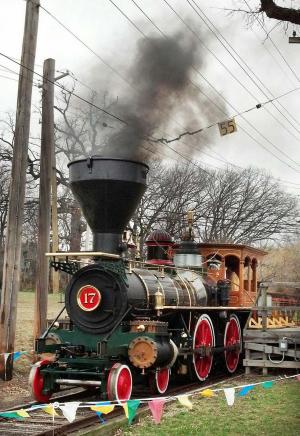 The Steam into History locomotive, No. 17, is on a test run in Illinois. It will run for real in several weeks on the old Northern Central Railway between New Freedom and Hanover Junction. Read more: Locomotive could arrive this month.

Answer about the Electric Map lights, from above
The old map has 600 Christmas-style lights, and they’re being replaced with LED lights.