An audience gets ready for the Electric Map at the old Gettysburg (Pa.) Visitors Center in its final days of operation. The last day to see the map and the rest of the old visitor’s center is Sunday, with the opening of the new museum on Monday. Background posts: Q&A on new Gettysburg visitor center, old Electric Map, Restored Gettysburg Cyclorama arriving in new home and Gettysburg’s Electric Map blinking in finale season.

Some have pointed out the Electric Map, a fixture in the Gettysburg (Pa.) Visitor Center, is itself an artifact of history and should be preserved.
No doubt many of those visiting the battlefield in the past 50 years consider it an integral part of the Gettysburg experience. It has helped millions understand the pivotal Civil War battle that raged, in part, on the soil beneath the building that houses it.
But the Electric Map might be an artifact in ways not considered up to this point… . 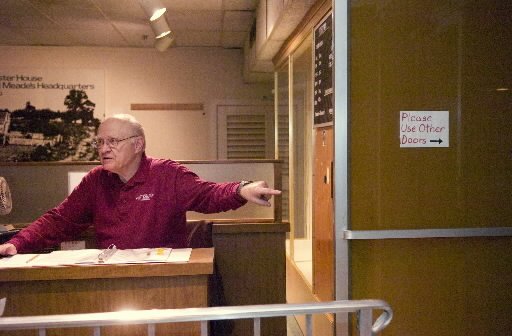 Warren Brockette of Gettysburg directs some folks to the Electric Map theater before starting the show. Background post: Shrink wrapping in Electric Map’s future; Gettysburg tooth heads south.
The once high-tech display is now badly out of date. It shows how technology has changed these past decades. And it shows how attention spans have become shorter as the TV generation has long passed and hand-held entertainment devices are out of date the minute your credit card is scanned.
And that Electric Map narrator. His authoritative pronouncements about the battle now seem to many to come from an eyewitness to the famous battle.
But put me among the preservationists.
The park service has put out the call for someone from the private sector to rescue the map.
Seems like an opportunity for an entrepreneur to preserve such a low-tech artifact in a high-tech world.
And that entrepreneur should explain to his new visitors why the Electric Map is an artifact of the second half of the 20th century before pressing the button for the taped voice to explain that key moment in the last half of the 19th century.

To see an interesting photograph on the underside of the Electric Map, visit Gettysburg’s Electric Map blinking in finale season.