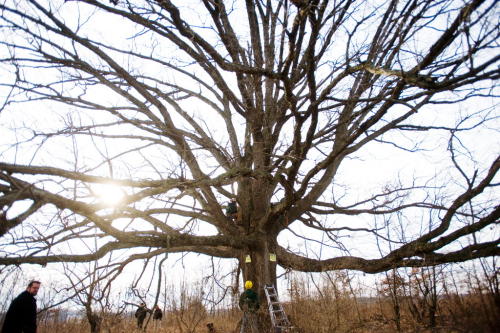 This 300-year-old Gettysburg Witness Tree caused the location of a shopping center to be moved a bit about a decade ago. Now, this tree, which was elderly at the time of the Battle of Gettysburg, is getting shafted. But the work is akin to pins in a broken leg. The Hanover Evening Sun reports that the tree’s long limbs have caused its base to crack. The Cumberland Valley Tree Service has volunteered to try to preserve the tree by putting rods in it to strengthen its base. Interesting. Tree surgeons are working to heal this tree that stands near Camp Letterman, a Civil War hospital site, where surgeons severed limbs to save bodies of the humans. Despite the split, the white oak, reportedly one of Pennsylvania’s oldest, is in good health. The old oak is near Route 30 in Straban Township on the eastern edge of Gettysburg. It’s encouraging to see such preservation efforts at a time when several prominent buildings in the region are coming down. Also of interest: Is this willow tree standing today on Powder Mill Road?

On the topic of preservation and demolition:

Blanda Nace, York County Economic Alliance’s senior manager of development, commented on Facebook under ydr.com story about the planned demolition of the Avalong barn. He provided context about the keeping – or losing – of such coveted structures:

“I too am disappointed about the demolition of this structure, but you all must understand the realities of Municipal Planning Code and Township regulations. There are rules and property rights that the BOS must adhere to. I’m not aware of anything that says that the BOS can deny an application for LD Plan or demo based upon history.

“In fact, when I was project manager for the stadium in the City, we demolished several VERY historic structures – not a fun thing to do, but sometimes is necessary to advance. Any development who would release plans prior to them being “set in concrete” would be foolish.

“So yes, everyone should be disappointed and maybe even angry, but please be sure to understand Codes and the approval process – and direct your anger to the proper place. I toured this property about 2 years ago for a potential business use, and honestly it needs a great deal of work in order to comply with current codes. On top of that, it has been vacant for how long? If there was true interest in saving the property, then someone would have done so already, as we had intended 2 years ago.

“Again, I hate to see it disappear as well, but there is nothing that the BOS can do to stop a private owner from doing what he wishes in order to increase the value of the site.”

Remember? Ydr.com’s ‘Remember’ series continues. This time? Watergate.
Forum of the day: Traditional tornado season is nearing, But tornadoes are becoming traditionally hard to predict. But who knows when they’ll hit? Have you ever been through a tornado or seen an area devastated after a twister went through? Please comment below. Background: York’s not known for tornadoes. Then we get two in two weeks in 2011.