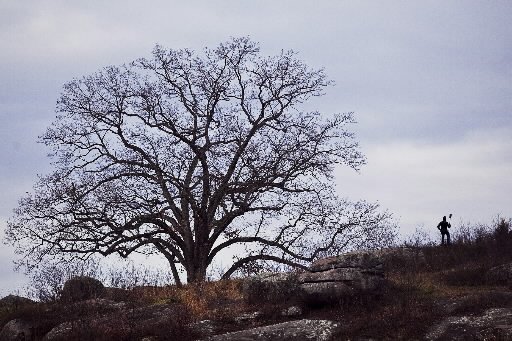 In 2006, vandals chained the 4th New York Artillery statue in the Devil’s Den area of the Gettysburg Battlefield and toppled the monument. They carried off its head. Just this week, the restored statue greeted visitors. The Hanover Evening Sun gave this description:  “Up ahead, a 600-pound bronze statue stood tall against the clouds… .” Also of interest: Vandalized Gettysburg statue gets new noggin.

Joe Farrell, who co-authored “Keystone Tombstones”, emailed with a word of thanks about a recent yorktownsquare.com post on the new book.

He gave a preview about local graves that will be featured in a future edition:

“We have already visited Prospect Hill Cemetery in preparing for Volume 2. We plan a chapter on Philip Livingston and plan to include the 2 congressional Medal Of Honor recipients, the Federal Cemetery, Soldiers Circle, and the 5 Confederate soldiers buried there in a mass grave. We also visited James Smith’s grave at the First Presbyterian Church and plan to mention David Grier as well.”

I suggested he consider Neil C. Roberts, the heroic Navy Seal, who is buried at Prospect Hill Cemetery.

If you have suggestions about York/Adams graves for Joe to profile in future volumes, bet he’ll be open to suggestions. Contact him at joseph.farrell@comcast.net  or comment below,  and I’ll forward to him.

Story of note: New Oxford has an Orange Car, too, and it’s back in the Adams County borough’s square. Check out: A holiday tradition in New Oxford.

Check this out: Here’s the scoop on a new blog, YDR Insider: “Step inside the York Daily Record with YDR Insider. Want to know who we are and how things work at your local print and online news provider? Well, this is the place to join the discussion.”

Forum of the day: Exchangers are discussing Sunday hunting, which date back to 200-year-old blue laws. For more on hunting season, see the York Daily Record/Sunday News opening day story.