Gettysburg field hospital – Nothing amusing about this view: Linked in with neat history stuff, May 30, 2012 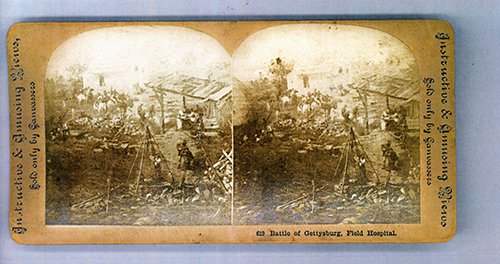 Gettysburg 150 is prompting folks to go through their collections and, more importantly, share them so they can be made public. ‘Copy of stereo viewer card I have in my file,’ Dave Spangler of York wrote. The U.S. Army General Hospital on Penn Park in York received hundreds of patients from such hospitals in the aftermath of the Battle of Gettysburg. They were transported from Gettysburg to Hanover Junction on the Hanover Branch Railroad and then north on the Northern Central to York. This card is marked ‘Instructive & Amusing Views.’ This card is definitely in the former category. Also of interest: Civil War 150th: Central York students fuse art and history in quilt.

York City Councilman Michael Helfrich, who has an intense interest in history, is excavating on the grounds of his well-known and historic abode.

He wrote on Facebook: “Finally finished the excavation of the Cookes House well from 1761. I dug 22 feet down and hit bedrock and the fresh water poured in. The colonial layer was in thick mud. Almost no artifacts at this level, but still have to sift/wash through the excavated materials. Found hundreds of 1895-1935 bottles, from the time it was changed from a well to an outhouse. Next step, fill in the hole. After that the sifting continues.”

The new five-and-dimes: This news story tells about a sign of the times. Remember the five-and-dimes? They’ve been upgraded, in a sense, to dollar stores. Check out the Chambersburg Public Opinion’s: Dollar stores.

A different take: Here’s a story about how Memorial Day came to be in the South. Slaves initiated this day of remembrance.

Bookstore for sale: The Reader Cafe in Hanover, a favorite haunt for folks who like books, is on the market. Here’s hoping there’s a book-loving buyer.

Gerald “Jerry” Cramer of Springettsbury Township was wounded in World War II. He considers himself lucky.