Gettysburg Cyclorama, with new shape, set for September display in 2008 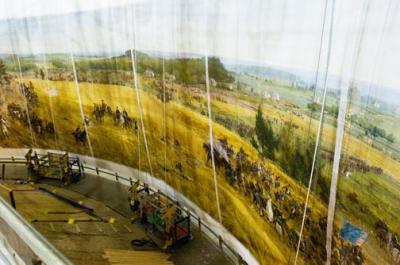 Panels of the Cyclorama painting, seen in the new Hunt Avenue visitors center in Gettysburg in 2008, await the stitching that will close the gaps. Background posts: Shrink wrapping in Electric Map’s future and Restored Cyclorama heading to new home.
Imagine stitching 14 panels in a 377-foot painting that stands 42 feet high.
And further imagine that the painting would not be flat against the wall – as it’s been for decades – but bowed in the middle, resembling its original hourglass shape.
That’s the job facing restorationists dealing with the painting at the new Gettysburg Cyclorama location. 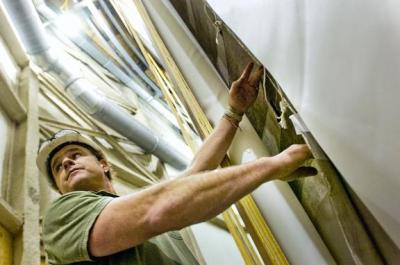 An article from the Hanover Evening Sunday and York Daily Record/Sunday News explains the process (1/6/08):
Even if you’ve seen the Cyclorama painting at the Gettysburg National Military Park, you’ve never seen it like this.
Conservators recently pulled together the 360-degree painting’s 14 panels, and restored its original hourglass shape.
“Basically, right now, this is the one and only hyperbolically shaped cyclorama painting in America,” said David Olin, the conservator in charge of the project.
The 377-foot painting stands 42 feet high and displays a panorama of Pickett’s Charge.
Olin said the Gettysburg Cyclorama painting has had a difficult life. After its initial display, Olin said, it was cut into pieces that were shipped to art shows across the country.
The National Park Service later hung the painting in the soon-to-be demolished Cyclorama building, where it stayed for 40 years.
The painting hung flat, Olin said, which stressed the paint.
Artist Paul Philippoteaux and a team of 20 created the work on a curved surface the conservators are working to recreate, Olin said, and any change in a canvas’ shape will encourage paint to wear off.
Returning the painting to that shape will help preserve it, Olin said. Further work will include painting in cracks and gaps in the painting, and recreating large portions of the painting that are missing.
Olin said it’s exciting to work on such a large project. There are few paintings in the world weighing more than 12 tons. And, at $11.2 million, Olin said the restoration far outsizes typical repair work, which usually tops out at $200,000 to $300,000.
The conservators he recruited from Poland previously worked on European cyclorama paintings, and readily agreed to temporarily relocate to the United States so they could work on another.
Olin credited Ryszard Wójtowicz, a member of the restoration team, for keeping the project on schedule.
Standing behind the painting – in an area currently accessible only by crawling under the heavy metal hoop that hangs at its bottom – Olin pointed to a seam between original pieces of canvas from the 1884 painting.
Faint lines straddled the seam, in what Olin described as a “surgical” stitch. Conservators guide the threads so precisely that they don’t breach the front of the painting.
Olin held his hands about a foot apart. That much, he said, took conservators about an hour to mend together on a flat surface. The remaining seams will have to be mended while the painting hangs about 42 feet high from the ceiling, and the conservators work from mechanical baskets.
Still, Olin said he’s confident the painting will be ready for public exhibition in September.

How it works
David Olin, owner of Olin Conservation and lead conservator on the Cyclorama restoration project, said the painting’s hourglass shape is more than a visual enhancement – it’s a matter of physics.
Olin said any cylinder of fabric under tension will bow in at the middle, and he described an experiment that can be done at home.
Load a pair of glasses with their mouths pointing toward each other into a tube sock, then, holding them securely through the sock, pull the glasses away from each other and watch what happens. That same shape will help the Cyclorama presentation feel more “immersive,” Olin said. In combination with dioramas that will be erected in front of the painting, it will create an illusion of depth.