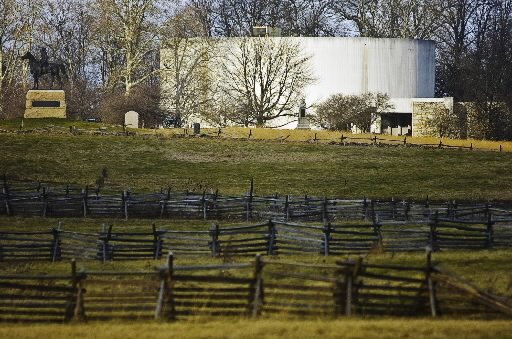 The battle of the Cyclorama building at the Gettysburg National Military Park is a classic clash between battlefield and architectural preservationists. The former group wants the battlefield to be restored to its 1863 appearance. The latter group sees and seeks architectural redemption in the longtime landmark. The Hanover Evening Sun reports that the building’s future may be decided in 2012. For a full discussion on the issue, visit The Evening Sun’s: End near for controversial Cyclorama? Also of interest: Opposing forces charge and countercharge over fate of old Gettysburg Cyclorama building.

In the York Sunday News, I wrote about something new that the York Daily Record/Sunday News is launching:

Starting this week, we will present an achiever from this region as part of a “People Who Matter” series in our print edition.

These are heroes from our communities who help others and our communities move ahead. They’ll often be unsung heroes. Our nominees may serve as connectors — people who link people and ideas in our community.
We’ll consider your nominations, too. Send your nominee with a brief description of why he or she matters to letters@ydr.com.

Think about the name of this feature (a concept borrowed from The News Journal in Delaware, by the way).

What higher accolade could someone receive than the idea that he or she matters?

Yorktownsquare.com readers will be interested in the selections. The People Who Matter no doubt will be among the community leaders of the first decade of the 20th century.

History is not new: The York City Council made a last-minute, politically charged approval of a 2012 budget on New Year’s Eve. But such decisions aren’t new as the following links attest: The Times A-Changin’? York City faced its share of problems 100 years ago, too. and Tough politics have always been with us. Consider the 1923 York mayoral campaign, in which Mayor “Huggy” prevailed.

Pork links: Two New Year’s dishes are being served around York County this time of year: pork and sauerkraut and hog maw. Here are some links with recipes and more: Helpful York County cooks come forward with their time-tested hog maw recipes and All posts about the Pennsylvania Dutch from the start and Check out these numerous stories about how York eats: Hog maw and such and Only in York County’s Joan Concilio writes all the time about York County food. See: New Year’s pork and sauerkraut, the 2012 edition.

Blog post of the day: You just have to see this photo on Joan’s Only in York County blog. It’s from New Year’s Eve/New Year’s Day 2011 of fireworks at York’s Continental Square.

Forum of the day: Well, it’s a kind of forum. It’s a puzzle in which readers find top York County newsmakers of 2011. For example: Who was the promising jurist died too young.