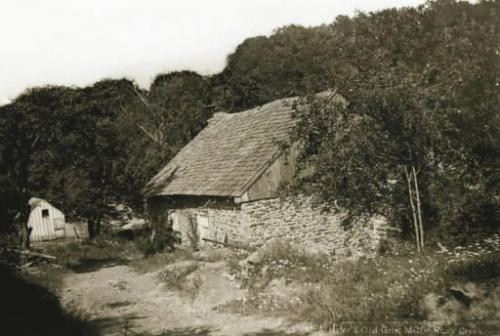 I’ve wanted to get a piece on Adams County’s McAllister’s Mill on here for years. The Hanover Evening Sun put up a story with photos several weeks ago, so I had an opportunity.

It starts with the land’s earliest residents and weaves its way through time, listening to the words of great men, trembling to the sounds of war’s cannons and hiding to escape the evils of history.

It is the story of McAllister’s Mill. Located along Baltimore Pike in Gettysburg, the mill housed the first meeting of the Adams County anti-slavery association, served as a stop along the Underground Railroad, and nursed soldiers back to health as a makeshift hospital during the Civil War.

Last year, the events that happened there were finally commemorated with the installation of a Pennsylvania historical marker, dedication ceremony and tour.

And there is a lot of story to tie in.

Native Americans first settled on the land that eventually became McAllister’s Mill about 8,000 years ago. They lived in caves split from two immense rocks, known to them as “wind caves” for the way strong winds often funneled through the natural structures. A 1950s archaeological dig commissioned on the site revealed artifacts still left from these original settlers.

The mill itself was built in the 1760s, each stone set by hand. While the mill no longer stands, the original raceway that guided the water from the dam to turn the mill wheel still remains, 250 years later.

In the 1770s, James Gettys’ brother-in-law, possibly a Mr. Flemming, bought the mill and upon his death, the town’s founder himself ran the mill for several years until it was eventually purchased by James McAllister in the early 19th century.

The McAllisters are the true personalities of this story.

From the beginning, James McAllister carried with him a fervent hatred of slavery that prompted him to hold at his mill the first meeting of what would eventually become the Adams County Anti-slavery Society. The gathering was held July 4, 1836, about 60 years after the Revolutionary War that McAllister’s own ancestors had fought in. The series of resolutions that came out of the meeting prove that it was filled with passionate and emboldened men.

They wrote that through free speech they would, “light up a fire mild and radiant, which will consume Slavery, illuminate the minds of free men, and melt the shackles from the limbs of our fellows within this Republic.”

Soon after the meeting at his mill, McAllister was elected president of the anti-slavery society. With such an intense sense of purpose, it is of no surprise that he passed that ardor onto his five sons, all of whom stood at an imposing 6 feet tall and went on to fight for the Union in the Civil War.

When the boys were still young, they helped their father in establishing their mill as a stop along the Underground Railroad. Runaway slaves came to the McAllisters from across the Mason-Dixon line in Maryland, and from there were often guided to northern Adams County and then on to Philadelphia or Canada.

Although the Underground Railroad has become immortalized in history, at the time, it was incredibly risky business. After the Fugitive Slave Act was passed in 1850, harboring an escaped slave became a crime, punishable by a $1,000 fine and prison time. Bounty hunters made a business out of the new act, hunting down the slaves like animals with sniffing hound dogs.

“It is important to give these people credit for what they were doing,” said Debra Sandoe McCauslin, a local author on the subject. “They were risking all of their livelihood so that other people could get their freedom.”

Dean Shultz, a Gettysburg engineer and preservationist whose family has owned the land directly adjacent to the mill since 1847, still remembers the ghost tales his former neighbors used to tell of those days.

They told me that years after the war, they could still hear the hounds outside, howling for the slaves, and see the lights from the hunters,” said Shultz. “I used to like that story very much when I was a boy.”

Meeting with runaway slaves face to face and hearing their horrific tales had a profound impact on the McAllister boys, eventually motivating them to take up arms against the Confederacy when they grew older.

“Is it any wonder that I grew up to young manhood hating slavery with a mortal hatred?” asked Theodore McAllister in an article he wrote years later for the Miller’s Review.

James McAllister would eventually lose a son in the war to end slavery. James Alexander McAllister was killed at the Battle of Vicksburg, about the same time that his home was gripped in the Battle of Gettysburg. This story was not uncommon. Many of the same men who formed the Adams County Anti-slavery Society 30 years earlier found themselves sacrificing their sons in order to support the cause that they felt so passionately about.

Throughout the war, the mill site continued to hold prominence. On June 26, just days before large-scale fighting broke out in Gettysburg, an unlucky Union scout happened upon a grouping of Confederate soldiers and was shot from his horse, on the McAllisters’ property.

Hearing the ruckus, James hitched up his wagon and headed to the scene to discover George Washington Sandoe in mortal condition. Showing off his ever audacious and bold character, McAllister reprimanded the Southerners for shooting the poor boy, since he had posed no direct threat to them. The aging abolitionist then brought Sandoe back to his home to bury him.

Sandoe, who was named after the nation’s founding father, became the first Civil War soldier killed in Pennsylvania, leaving his young bride a widow and foreshadowing the many tragedies that would unfold over the next few days.

“For me, the irony of having an ancestor die at the same place where 30 years earlier a meeting was held where men talked about ending slavery is pretty interesting,” said McCauslin, who is a descendant of Sandoe.

During the battle, that irony grew as the mill went on to become a makeshift field hospital. Shultz’s family home also housed wounded soldiers throughout the battle, the blood stains on his dining room floor still evidence of that.

“My family always tells the story of a soldier who was nursed back to health at our house,” Shultz said. “When it was time for him to leave, he left his musket behind, explaining that he never wanted to see that gun or fight in another war again.”

After the war, a flood washed out the dam, and although it was rebuilt, the mill was never again as prosperous. The McAllisters eventually sold the property and the dam fell into disrepair.

In the first half of the 20th century, the mill site was used as the town dump. Garbage trucks used to drive out to the property and simply dump and then burn the trash.

“When I was a kid I used to come out here and shoot rats that would gather around the trash,” Shultz said.

In the 1950s, the dump eventually closed down, but only to be replaced by a construction waste site 50 years later. Shultz has been fighting the Borough of Gettysburg for years over the dump that lies right next to the old mill property lines, but has yet to see much success. As the waste is mostly tree clippings and concrete, it hasn’t proven to yield any environmental harm and the borough claims that to move it would simply be too expensive.

Shultz ran up against a similar fight 15 years ago when a company moved in to buy the mineral rights to Wind Cave, where the Native Americans had lived thousands of years earlier. But his efforts proved to be in vain, and the company destroyed the cave and sold the pieces.

“You can’t even save the rocks anymore,” said an exasperated Shultz.

With the creation of a new historical marker and the weekly tours that have come into the area, the newest battle that has taken over McAllister’s Mill seems to be one over preservation.

“We are not just interested in history,” said Musselman. “But we also really want to preserve it.”

Today, all that remains are a few stones from the foundation of the building. It is fabled that many of the stones were pilfered away for use in other construction projects around town.

Although the mill only exists today in a diminished state, its historical significance is still strong.

“There is a neat story at the mill that hasn’t really been told around here,” said Musselman. “It tells the whole story. It shows why people were even fighting here.”

For the McAllisters at least, there was no doubting that purpose.