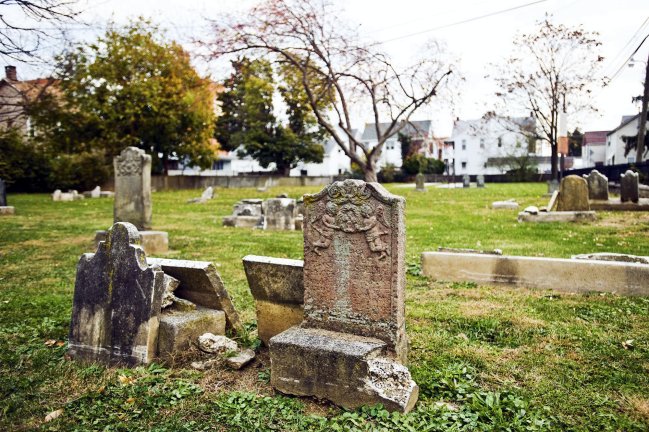 The German Reformed Church Cemetery in Hanover, Pa., was the site of 11 Union fighting men who fell in the Battle of Hanover on June 30, 1863. Their bodies were later exhumed and reburied in the national cemetery in Gettysburg, the site of Gettysburg Address 150 observances this week. But back in Hanover, the historical cemetery has fallen on hard times. “Instead of the flowers and flags one might think would adorn a historic burial plot, Hanover’s German Reformed Cemetery is a cluster of nearly illegible stones, toppled and cracked in a lonely lot on School Avenue behind Trinity United Church of Christ,” the Evening Sun in Hanover reported. For more, see: Hanover Cemetery in disrepair. Also of interest: Gettysburg Address 150: Check out these 5 memorable story and photo links. 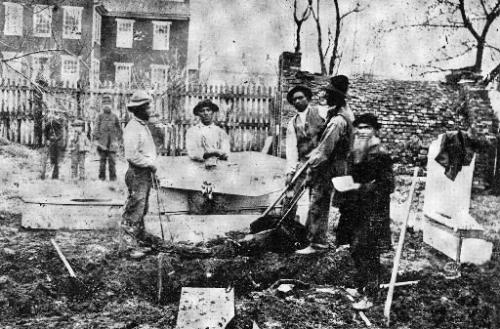 Bodies of fighting men were exhumed from the German Reformed Cemetery after the Battle of Hanover, as documented in this famous photograph. For more, see: York County’s best-known exhumation. 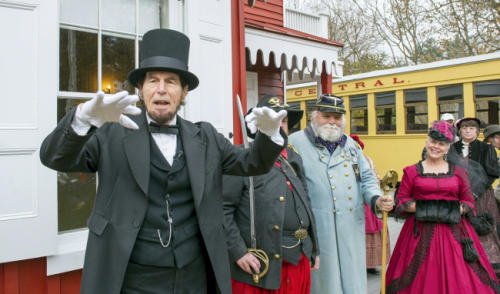 Abe Lincoln, or at least a re-enactor, appeared in Hanover Junction Sunday as part of Steam into History’s Gettysburg Address 150 observances. Lincoln passed through Hanover Junction on his way to and from Gettysburg. Check out this photo gallery.

2. Stephen H. Smith blogs about where Lincoln stood in giving his Gettysburg Address.

3. James Getty is the best-known Lincoln living historian, and he’ll have the honor of delivering the Gettysburg Address on Tuesday. Here’s a bit more on the appropriately named James Getty.

4. The Gettysburg Address is a sacred but elusive text. “No definitive edition exists of the speech that countless children have memorized, the Associated Press reported.