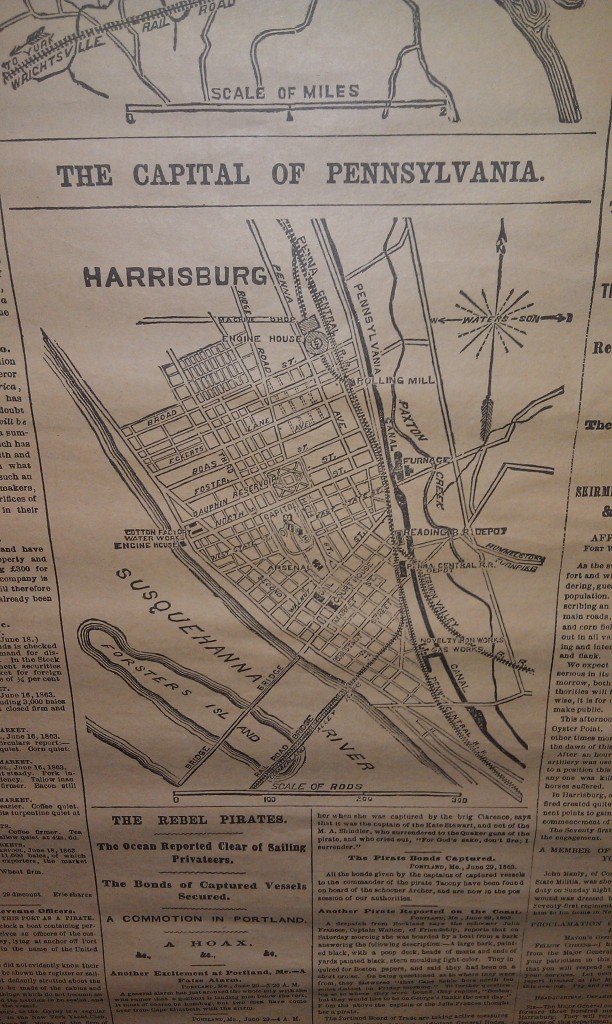 Civil War generals would often acquire copies of newspapers published in the areas through which they were moving to add their repository of information. This is such a map showing Harrisburg at the time of the Confederate Gettysburg campaign. If Confederate Gen. Dick Ewell had secured this copy, he would have been well-briefed about the state capital he was fronting. When rebel cavalry Gen. Jeb Stuart was in Hanover, he read a York newspaper telling about Jubal Early’s countermarch to Gettysburg. Even with that information, he missed Early and headed through York County and farther north to Carlisle in search of friendly troops. He finally met up with his commanding Gen. Robert E. Lee on the second day of fighting at Gettysburg.  York County collectors Terry Zellers and Beth Reinhold provided this newspaper. Also from Zellers/Reinhold: Can you ID this York, Pa., photograph?

Interesting anniversary stuff from all over …

The Carlisle Sentinel tells about an observance in which Jeb Stuart was welcomed back to their town: Carlisle once commemorated Confederate’s invasion of Pennsylvania.

That’s akin to York’s welcome of Gen. John B. Gordon, the man whose brigade overran York County in 1863.

Not sure why towns pay tribute to military men who did them harm.

“About gain for York – on the 28th through the 30th there will be a LOT of activity at Wrightsville – and Columbia. Gettysburg fans might (should) come over this way & drop off a few dollars as they do.  As an aside the Lower Windsor bunch will have tours of the Wrightsville cemeteries – Fairview, Union, St. Mary’s and Mount Pisgah – all with Civil War vets – and there will be some interesting (I hope) handouts.”

Burning Bridge is an anniversary wine put forth by a Lancaster County winery. I don’t know about such  souvenirs.  The burning of the Columbia-Wrightsville Bridge was a terrible Civil War moment. The flames threatening to burn down Wrightsville and harmed commerce for five years until its replacement could be built.