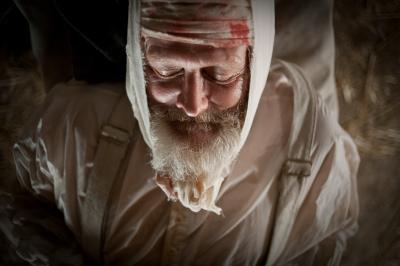 After Independence Day in 1863, the story around Gettysburg involved treating the wounded. One hundred and fifty years later, re-enactments on those post-Battle of Gettysburg days are being played out. Here, Ken Staley of Florida re-enacts a brain surgery in a living history exhibit at the Confederate Field Hospital on Daniel Lady Farm in Gettysburg. Read more in the Hanover, Pa., Evening Sun’s: Healing side of history comes to light at Gettysburg. Also of interest: Civil War affected women in York County – and vice versa.

Check out these stories, photos and videos – the best picks from Gettysburg 150 on 7/6/13:

1. One thing about covering Gettysburg 150. There are interesting stories everywhere. Check out the combined forces of York/Hanover/Chambersburg’s newsrooms on the following stories about the serious and the not-so involving bodies and body odor: Yes, there are still bodies buried on the Gettysburg battlefield and Gettysburg 150th re-enactors deal with body odor.

2. Here’s a quick look at July 5 activities and York/Hanover/Chambersburg coverage around Gettysburg 150th.

4. A photographic look at 10 defining moments in U.S. history, which, of course, includes the Battle of Gettysburg.

5. Where do you re-enactors get authentic glasses?

This is a re-run but this is just so interesting: Take a look at the Union’s ultimate weapon during the Civil War.

Gettysburg 150th: The anniversary at a glance

A collection of Gettysburg 150th coverage from The (Hanover) Evening Sun, the York Daily Record/Sunday News, the (Chambersburg) Public Opinion and the Lebanon Daily News.A Confederate re-enactor puts everything he has into his role during the first of two multi-day re-enactments in Gettysburg.Quick read: Today at Gettysburg 150th for June 27 July 5, 2013 · Toppled monument helped save Gettysburg · Descendant of Gettysburg heroine approves plans for plaque · Confederate invasion remembered at York market · And more Open …

View “Gettysburg 150th: The anniversary at a glance” on Spundge