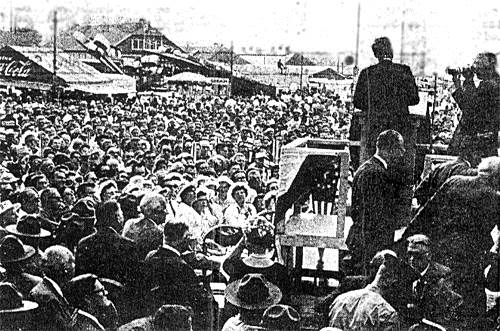 Presidents are in the news this week. Nov. 19 is famously the anniversary of Abraham Lincoln’s Gettysburg Address. That was 150 Nov. 19s ago. Here, a newspaper photograph shows candidate John F. Kennedy addressing a York Fair audience in September 1960. On Nov. 22, the world will observe the 50th anniversary of his assassination. Both men gained their presidencies 100 years apart. Both were assassinated in office, Lincoln the first and Kennedy, we hope, the last. Also of interest: Reworking the working list of U.S. presidential visits to York and Adams counties.

Best of coverage events and activities related to the 150th anniversary of Abraham Lincoln’s delivery of the Gettysburg Address … .

1. This presidential quiz brings out facts – both fun and serious – about presidents.  For example, what future U.S. president served under future president Rutherford B. Hayes in the Civil War?

2. OK, President Obama’s decision not to travel to Gettysburg is still being discussed – and cussed. Here’s a CNN column that quotes the York Daily’s Record/Sunday News’ editorial decrying his decision.

5. If you want to watch the 10 a.m. observances live, here is the National Park Service’s livestream.

6. The title of a new book linked to Gettysburg Address 150 gives an apt description of its content: “The Civil War in Pennsylvania: The African American Experience.” The book features essays written by national experts on African-American life from 1861 to 1865. The book is available at www.ShopPAHeritage.com

Yorkblogger Stephen H. Smith explores the various sites at the National Cemetery where Lincoln stood to deliver his speech.