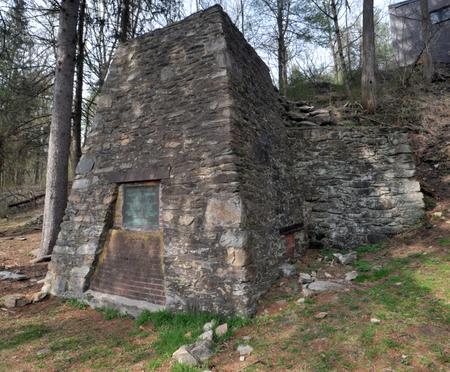 Jubal Early was known as rash and unpredictable, and he added to that reputation by scorching the ironworks owned by hated abolitionist Thaddeus Stevens.

This had an impact on York about 50 miles to the east.

People fleeing the Confederate Army’s advance in late-June 1863 spread word along the way about Early’s action. If Early did that to private property in Franklin County, why wouldn’t he order the burning of York?

York’s father factored this type of intelligence into their deliberations about how to address the approaching Confederates. Wait for them to enter the city. Go out to negotiate with them before they could see York’s light defenses.

In the end, the York’s fathers decide to surrender to Early before he entered the town.

So all this goes to show how one event in history can weigh on another in a distant town.

Here is the Chambersburg Public Opinion’s story on Early’s rash act in Caledonia:

Before the first cannons of Gettysburg fired, there came a moment of revenge from the Confederates against the livelihood of one outspoken man: Thaddeus Stevens.

On the mark of the 150 years since the burning of the Caledonia Ironworks, Ross Hetrick, president of the Thaddeus Stevens Society, told a crowded room Saturday at Caledonia State Park about Stevens’ story and what impact the man and the event made in the nation’s history.

Confederate forces, under the command of Maj. Gen. Jubal Early, burned and looted the Caledonia Ironworks on June 26, 1863, where 200 to 250 people were working, namely due to Early’s dislike of U.S. Rep. Thaddeus Stevens from Lancaster – a strong politician and an advocate for abolishing slavery.

The event began on June 16, 1863 when a man came running into the mill’s office and told Stevens of approaching Confederate troops. Stevens left the mill.

On June 25, Gen. Early took control of the mill and the mill’s manager, John Sweeney, pleaded to them to not destroy the mill, as it did not make much money and provided jobs to the workers more than anything else.

However, Early destroyed a furnace, forge and rolling mill and took full responsibility for the burning, saying that Robert E. Lee or Gen. S. Ewell, his commanding general, did not know about it.

“There have been instances of forgetfulness on the part of some that they have in keeping the yet unsullied reputation of the army, and that the duties exacted of us by civilization and Christianity are not less obligatory in the country of the enemy then our own,” Lee wrote.

The Confederates also reportedly captured as many as 50 African-Americans who had been born and raised in Pennsylvania and were abducted and sent into slavery in the South.

“It comes down to a question of honesty,” Hetrick said. “Lee said he was pursuing a Christian approach to war and blamed transgressions on subordinates who were not punished. In contrast, Union general William Tecumseh Sherman famously said “War is hell” and made no apologies for transgressions. It appears the Southerners were not willing to be as frank and straightforward about their actions.”

Hetrick wanted to share the story for several reasons.

“A lot of the details had never been put together,” Hetrick said. “It’s also a very important milestone to talk about this event.”

The Pennsylvania Alpine Club paid for the reconstruction of the stack of the old furnace and built a monument in 1927.

The organization is looking to help keep Steven’s other furnace, Maria Furnace near Fairfield protected. They also are working on protecting Stevens’ burial place, Shreiner-Concord Cemetery in Lancaster, which was the only integrated burial place at the time.

There were many questions from the crowd, some interested in the man’s personal life after a portrayal of the man in Steven Spielberg’s film “Lincoln,” when Stevens was played by Tommy Lee Jones.

“There is a lot of misinformation about Stevens,” Hetrick said, clarifying that Stevens had led a discussion on public education in Pennsylvania that eventually led to its continued success and that he had been a lawyer who represented some slave owners until he was impacted by one case in particular, involving a married mother who had escaped and lived for a long time as a free woman before being sent back.

“It had a dramatic effect on him,” Hetrick said. “He never took a slave owners case again. In fact, he took fugitive slave cases for free.”

Caledonia Ironworks was also a station on the Underground Railroad, Hetrick said, which offered runaway slaves help on their journey north. Despite the overwhelming financial loss, which Stevens calculated at about $90,000, he reportedly still worried about the 200-250 men who worked at the forge. “I know not what the poor families will do,” he wrote in a letter to an ex-law student. “I must provide for their present relief.” Stevens did not request government assistance in repairing the ironworks, but he was able to continue to pay his workers, rebuild the ironworks and continued to operate it until his death in 1868.

Here is a rundown on June 30 coverage associated with Gettysburg 150:

Catch up with stories from June 30 at the Gettysburg 150th anniversary.Above the fray: An aerial view of Gettysburg 150th re-enactmentsPhotos: Gettysburg then and now June 30, 2013 · Re-enactors strive to bring the past to life through costumes and battles. These photos of Civil War images and their modern counterparts show how close they often get. Open this article Re-enactors, and ticks, love the Gettysburg battlefield June 30, 2013 · ydr.com · While ticks have been known to roam …