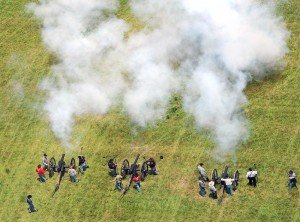 Pickett’s Charge came a few days earlier than its anniversary in this 150th weekend re-enactment in Gettysburg. The charge, sometimes called Longstreet’s Assault, took place 150 years ago today. Jason Plotkin’s aerial photograph of the Blue Gray Alliance captured action on the Bushey Farm. The cannonade before the charge created interesting smoke patterns from the aerial, Plotkin wrote. See another dozen aerial photos of the Bushey Farm re-enactment at ydr.com’s Media Center. A second Gettysburg 150 re-enactment weekend starts on July 4. (Click on this image to enlarge.) Also of interest:  Does Washington Township’s ‘The Pickets’ link with Civil War?

Check out these memorable stories, photos and videos from Gettysburg 150:

1. This wrapup story – Quick read – pulls together coverage from the battlefield and beyond, leading with:  Civil War a question of character for black re-enactor.

2. Lee’s summer military campaign of 1863 impacted communities across southcentral Pennsylvania. Hanover was one of the most affected, site of cavalry clash that resulted in 300 casualties. So re-enactors gathered there Tuesday. See this ydr.com Media Center slideshow on the event, with this story: Battle re-enactment held ‘with military precision.’

3. Communities across Pennsylvania and the North sent their sons to Gettysburg. One of the most notable was Norristown’s Winfield Scott Hancock.

4. Not all artifacts can be displayed at the National Park Service’s Visitors Center. Not when you have 300,000 of them. Check out this behind-the-scenes look at the archives with photos.