Gettysburg 150: 5 best bets in photos, videos and the written word 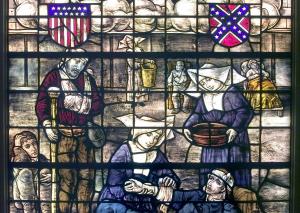 This stained-glass window at St. Francis Xavier Church in Gettysburg tells the story of the aftermath of the Battle of Gettysburg, 150 years ago. It shows the Sisters of Charity from Emmitsburg, Md., aiding wounded soldiers. For more on the battle’s aftermath, see Wounded Warriors. (Click to enlarge.) Also of interest: York County Civil War hero grandmom of Gore Vidal.

1. How we did it: For those who want to know how the York/Hanover/Chambersburg covered Gettysburg 150, here’s a glimpse: The Redoubt no doubt aided Gettysburg 150 coverage. 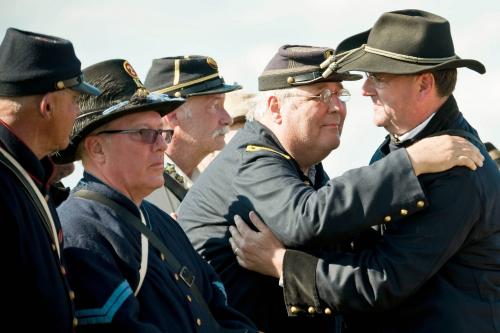 2. These re-enactors were on the scene for Gettysburg 100. Bruce Null, left, of Baltimore, Walter Hilderman III, of Frederick, Md., and Robert Lyons, of Baltimore, say hello before a ceremony recognizing their part in the 100th anniversary. For more, see: 37 veteran re-enactors.

3. For a quick read on the various Gettysburg events and stories around the battlefield on July 6, check out: Gettysburg 150, at a glance … .

4. Remember the Electric map? Well, it wasn’t part of Gettysburg 150 in its new Hanover home, but it will be unveiled soon: Electric Map repairs moving at a good pace.

5. Photography came of age in the American Civil War, and the nostalgia for the way it used to be done came through in this weekend’s re-enactment. Old-fashioned cameras captured images of present-day living historians.

All the York/Hanover/Chambersburg/Lebanon coverage comes together on this website: Civil War 150.