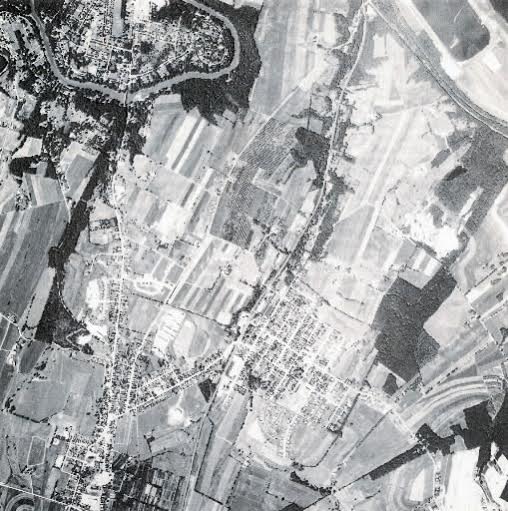 Mount Wolf borough sits in the center of this undated picture. That road running diagonally starting at about 7 o’clock gives it away – the longtime main connector between Mount Wolf and its neighboring borough, Manchester. The terrain looks flat here, of course, but it’s actually rolling. The town was a summit on the railroad, the source of ‘Mount.’ Interest is growing in Mount Wolf, Pennsylvania gubernatorial candidate Tom Wolf’s home in boyhood and adulthood. Also of interest: Wolf Man. Wolfchester. No, the Village of Mount Wolf.

For years, Charles Stambaugh has been involved with Mount Wolf’s history documentation, 2010 centennial, website, and museum planning. He even has an official Mount Wolf job, as the borough’s tax collector.

So he knows what’s going on in Mount Wolf, and what is going on is that people from far and wide are interested in this borough of about 1,400.

“We reprinted our history book, and they are selling like hot cakes, and our website is seeing a lot of traffic,” he told York Daily Record photographer Paul Kuehnel. “Everyone is interested in where the possible new governor lives.”

That candidate for governor, of course, is Mount Wolf’s own Tom Wolf.

1. This is the borough website that has attracted so much attention:  MountWolfBorough.com. That interesting website has several interesting home page links, including one to Tom Wolf’s campaign site.  By the way, another link transports you to a York County outhouse site (another Stambaugh project that includes Mount Wolf privy pictures. More about that in a future post).

3.  The borough’s fast-selling  history book, “A History of Mount Wolf,”  was updated in 2010, with new material to supplement the original work of Brad Rentzel. Fifteen years ago, I listed Rentzel’s original book as one of the best town histories in York County. The 2010 updates made it even better. Ordering info: Mount Wolf history.

4. A Facebook page, administrated by York Daily Record engagement editor Buffy Andrews, can be found at: ‘I grew up in Manchester/Mount Wolf and surrounding areas.’ One can suppose that Manchester is listed first alphabetically – or perhaps because it’s Buffy’s hometown.

5. The YorkTownSquare post tries to briefly summarize Mount Wolf’s story with the ambitious headline:  All about Mount Wolf. Home of Pennsylvania’s next governor?

6. YorkTownSquare also has a Mount Wolf category and a York County’s Tom Wolf category, with scores of stories and photos combined.

7. Scott Mingus, on his Cannonball Civil War blog, tells about the Confederate raid on Mount Wolf and nearby bridges: Fire on the Conewago and More on the York Haven Bridges. (To this day, the Wolf family has then-worthless Confederate money the raiders left behind for items taken from the Wolf store.)

8. This YorkTownSquare.com post  – Wolf builds from deep foundation on banks of Susquehanna River  – tells about the family business’ early days and includes a neat drawing of the original Wolf lumber yard.

9. This YorkTownSquare.com post – 10 ways to learn more about Tom Wolf – provides lots of additional links about the borough and its native son.

Check out the battle of the Toms, Wolf v. Corbett at YDR.com’s Pa. Governor’s Race page. 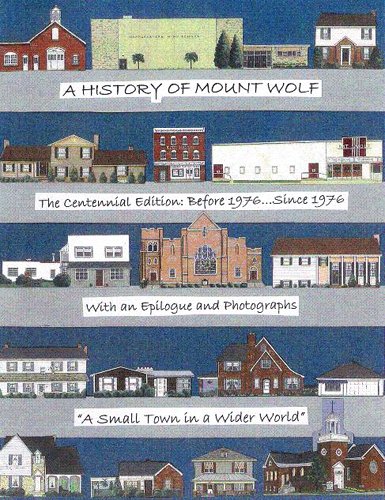 This is the cover of Mount Wolf’s history book, written by Brad Rentzel and updated for the 2010 centennial year. Charles Stambaugh pointed out that the borough was recognized with two awards for its centennial work: York County Heritage Trust Community Award  and PA Municipal Website Contest .