Gen. Jacob Loucks Devers in WW II: Did his quick smile count against him? 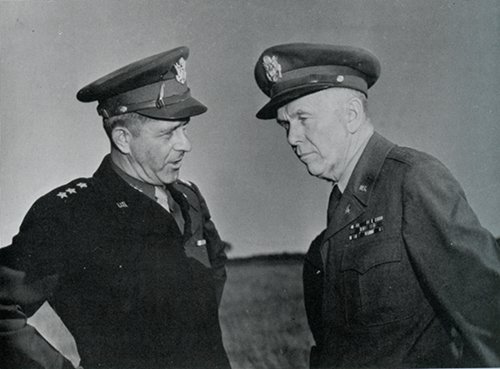 I asked York countian Rich Robinson, a student of Devers, his views about something a fellow Devers’ scholar said in a visit here:

Devers’ quick grin and non-military-like disposition counted against him – it impacted his gravitas  His commanders, thus, didn’t treat him as seriously as they might have otherwise.

Here’s is Rich’s response to that query:

The question about the friction between Generals Devers, Eisenhower, and Bradley can be viewed from many different vantage points. Those officers who did not like General Devers implied he was always smirking at them. Regarding the appearance of General Devers, he did often appear to be smiling. As a cadet at West Point he even received a demerit from an instructor who thought he was smiling during drill. He had that kind of face.

At the outbreak of the war, when Devers was one of several newly promoted senior officers being introduced to the public at large, reporters made a point of describing his grin (I believe similar comments were made of Eisenhower). American generals, with the exception of Patton, were invariably forced toward a mold to appeal to one of the most formidable shapers of public opinion in those days: American mothers. General officers in the United States Army had to appear to combine the military genius of Napoleon and the wisdom of Judge James K. Hardy (as played by Lewis Stone) in the popular period movies about an improbable American youth, Andy Hardy (as played by Mickey Rooney). Contemporary newspaper articles about Devers made much of his not swearing, drinking, or smoking. He actually didn’t swear much, drank on social occasions, and smoked sporadically.

When the United States got into the war and the shooting started promotions came rapidly for many men who had been marking time as majors and colonels for the majority of their careers. Eisenhower and Bradley, who had not served overseas in World War I, were among the first of the newly promoted to go to Europe and North Africa. Once they had heard shots fired in anger, they were both very quick to look down their noses at men such as General Devers who had not yet seen action. At the same time, General Eisenhower was acutely sensitive to how he was regarded by General Marshall, especially if he thought there were real or imagined rivals on the scene. It was said when General Devers came to North Africa on an inspection trip, Eisenhower thought Devers was deliberately critical as a means of undermining him. I am not sure Devers was so devious or cunning, but if he saw something he didn’t like he said so.

The rift between the two men widened when Eisenhower was commanding U.S. forces in the Mediterranean Theater and Devers was in command of the European Theater. Eisenhower requested several heavy bomber groups be sent from England to Italy. At the time the 8th Air Force in England was taking a terrific beating from the Germans. Its commander, General Ira Eaker, was under tremendous pressure from Washington to get more planes into the air. Devers realized Eaker’s superior, General Henry Arnold did not fully appreciate the odds against the 8th Air Force and knew every available plane was needed to carry out its mission. Sending any planes to Eisenhower would have deprived the 8th Air Force of aircraft it could not afford to lose. Eisenhower did not see it that way and was furious at having his request denied.

When Eisenhower was selected as Supreme Allied Commander for the invasion of Normandy, he may have believed he had shelved General Devers by agreeing to have him sent to Italy. Marshall questioned Eisenhower when it was clear Eisenhower did not want Devers to remain in England. Eisenhower denied any ill will, but I think few were deceived by his denials. I believe he always saw Devers as a potential rival, even after any real possibility of competition had passed. Some historians have pointed out Eisenhower was aware of General Devers’ criticism of his strategy in Western Europe. While it is true Devers was critical, he was hardly alone in his observations and he was not as vitriolic as Patton or as condescending as Field Marshall Montgomery.

The other element in the equation may be more basic. Eisenhower and Bradley were something of intellectual snobs, and regarded Devers as lacking in education and sophistication. Devers had a management style radically different from theirs and believed in swift action. He did not have top heavy general staffs and found it preferable to solve problems by personally engaging the parties involved rather than compile position papers and memos. Devers had a way of talking through problems in order to solve them as fast as he could. This kind of approach annoyed Eisenhower who often avoided problems or let them fester unless he was forced to act. As for Bradley, I think Devers’ style was indescribably irritating, since Devers did not have to brood or ruminate over challenges longer than a day or two. The staff of Devers’ Sixth Army Group was half the size of Bradley’s 12th Army Group. Fellow officers who served with General Devers commented on his ability to distill problems quickly and keep the solutions simple. 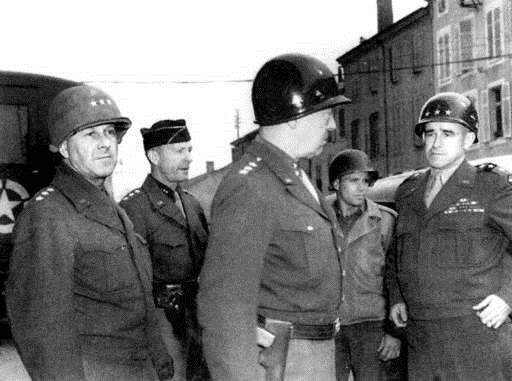 – For scores of photos and stories about York County in World War II, check out this blog’s WW II category.

– Check out these stories that touch on Devers, in full or in part.