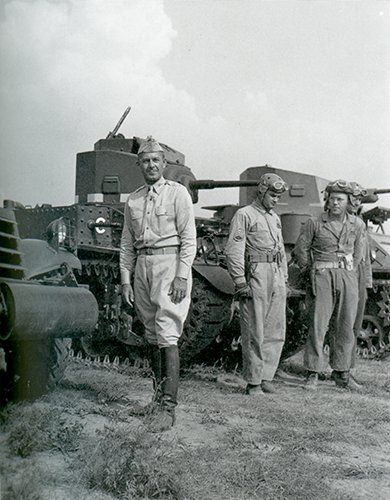 Rich Robinson is a York countian with a passion to explore the life and times of Jacob Loucks Devers.

He addressed Devers’ backing of the development of armored units in Part I of this series.

Here he addresses four more little-known or misunderstood facts about this hero, who grew up on then-West York Avenue.

Little or no German activity was observed on the other side of the Rhine as American troops prepared to cross by the end of the month.  General Devers and General Patch were confident of forcing a crossing and flanking the Germans facing Patton’s Third Army.  Troops received instructions on the handling of assault boats and bridging equipment was sent forward in anticipation of a successful attack on the opposite shore.  The crossing of the Rhine was one the paramount objectives of Allied forces since the Normandy landings in June and the Sixth Army Group’s invasion of southern France in August, 1944.

On November 24, 1944, Generals Eisenhower and Bradley visited the General Devers’ Sixth Army Group and learned of the plans to cross the Rhine.  In a meeting with General Devers at his headquarters, General Eisenhower ordered Devers to stop all planning for a river crossing.  Instead, he ordered Patch’s troops to turn north and proceed to attack the Germans on the Siegfried Line with the same purpose of helping Patton and the Third Army.

Devers was astonished by this directive and argued against it.  He felt the Sixth Army Group was the only Allied formation advancing in the West and thought this success ought to be reinforced, not stopped.  Eisenhower would not change his mind and insisted the Seventh Army change the direction of its attack.  Devers may have damaged his standing with Eisenhower even more by his argument in favor of crossing the Rhine and his questioning of Eisenhower orders.

By this stage in the war Eisenhower had formed a strong dislike of Devers and had little confidence in him despite the achievements of the Sixth Army Group. Devers began to realize how he stood with Eisenhower and Bradley and saw he was something of an outsider.

When Devers delivered the news the Seventh Army would not be crossing the Rhine, General Patch and members of his staff were equally surprised and dismayed.  Some felt Eisenhower lacked the audacity to take a calculated risk and strike boldly.  One, General Garrison Davidson, thought allowing a Rhine crossing in November might have prevented the Battle of the Bulge and shortened the war by several months. (Check out this account of this moment: Lost Victories.)

2. Devers and the French
As a result of the disastrous military defeat of the French in 1940 and the subsequent conduct of the Vichy government, many American politicians and generals dismissed the fighting spirit of any French troops.  General Devers was one of the few senior American officers who did not share this view.

While serving as Deputy Commander of the Mediterranean Theater of Operations, General Devers gained an appreciation and respect for the French forces fighting in Italy.  As the invasion of southern France was being planned, it was clear a large component of French troops would be included in the landing forces.  Devers understood how much the liberation of their homeland meant to the French.  He made his simple, straightforward approach known from the start of his association with French officers and soldiers.  He wanted them to succeed and he was prepared to do all he could to help them.

The resolve of General Devers would be put to the test when Charles De Gaulle appointed General Jean de Lattre to the command of French forces. De Lattre was a colorful, energetic, and temperamental officer.  Devers once said if de Lattre did not have several temper tantrums each week, he must have been ill.  Devers also recognized de Lattre was an aggressive, ruthless, and determined general who would not stop fighting until French national and military honor was restored.

Both men grew to respect on another despite their differences.  In contrast to the tensions between General Eisenhower and Field Marshall Montgomery, General Devers and de Lattre forged a successful and exemplary partnership and worked well together even when the objectives of the Allies differed from those of the French, as they did in the latter months of the war.  General Devers was especially fortunate to have Colonel Henry Cabot Lodge, Jr., former Senator from Massachusetts, as his liaison officer with the French.  Both men demonstrated their appreciation of French national pride as it related to their military and political objectives.

No American general has directly commanded more French troops before or since the Second World War.

3. The DUKW
The DUKW was an amphibious truck credited by Dwight Eisenhower as one of the instrumental pieces of equipment essential to Allied victory in the Second World War.  According to Dr. Vannever Bush, head of the U. S. Office of Scientific Research and Development, were it not for the open mindedness and vision of General Jacob Devers, introduction of the DUKW might have been dismissed by the Army or delayed for a long period of time.

While commanding the Armored Force at Fort Knox, Devers realized one of the greatest challenges the Allies would face in liberating Europe was the lack of port facilities, especially tanks. At one point, President Roosevelt suggested Sherman tanks be placed in large crates and thrown off of supply ships.  Roosevelt knew the tanks would float.  While the President was correct, he did not take into account ocean currents and tides.  A floating tank might float to shore, or it might float out to sea.

When Devers heard of an amphibious truck being developed by the Office of Scientific Research, he wanted to see one in action.  A crated tank lashed between two amphibious trucks might be the solution to getting tanks ashore.

When Devers saw the DUKW he immediately recognized its potential in helping to overcome the challenges posed by landing an army on a beach.  While tanks were landed by specially designed landing craft, the DUKW proved invaluable in landing supplies in locations not suited to larger vessels.  Dr. Bush later informed Secretary of War, Henry Stimson, and Army Chief of Staff, George C. Marshall, it was General Devers who cut through the Army’s layers of red tape to get the DUKW into service in time to make a decisive difference in Allied operations.

4. General Devers and the Helicopter
In the years between the end of the Second World War and his retirement in 1949, General Devers commanded Army Ground Forces and its successor Army Field Forces.

These commands were responsible for the training and organization of the Army in the post war period. During this same period, the U. S. Army Air Force became the U. S. Air Force.  Most Air Force generals were interested in the development of intercontinental bombers and jet fighters. They showed little interest in a new kind of tactical aircraft. When General Devers first saw helicopters demonstrated he immediately recognized their practical application.

He wrote to the Army Chief of Staff, General Eisenhower, asking for authorization to purchase a number of helicopters for evaluation. Eisenhower replied if Devers could find the money, he could have his helicopters.

Devers found the money and began a new direction for Army aviation. 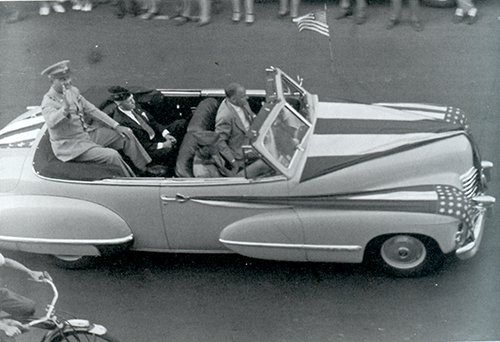 Devers takes a victory lap in his hometown in 1945. The photos in this post come from Michael Markey’s ‘Jake,’ available for purchase at the York County Heritage Trust’s website.

These past stories and photos touch on Jacob L. Devers in full or in part.

– Part 3 of this series will come soon.